Oba (engr.) Moses .o.agunsoye Ii Of Ijebu-jesa Solicits  The Support Of His People For The Success Of The Forthcoming  2019 Egboro Day Celebration. 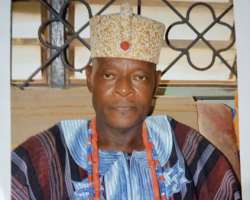 THE Elegboro of Ijebu-jesa,His Royal Majesty Oba (Engr.) Moses Oluwafemi Agunsoye II, has called on all sons and daughters of Ijebu-jesa at home and abroad to stand up to the clarion call on them to come home and financially support the success of this year’s special one hundred million(100 000 000M) naira fund raising ceremony for the construction and renovation of the King’s palace which will take place from November 1st to 9th November, 2019 at Ijebu-jesa Grammar School play ground in the ancient city of Ijebu-jesa in Oriade local government area of Osun State, Nigeria.

He made the call on 21st October, 2019 as special guest at Timsed Broadcasting sevice ‘Alejo Pataki’weekly radio interview program on this year’s Ijebu-jesa Egboro day celebration with the producer and anchor, Mr. Adekunle Adeyemo.

Oba Agunsoye II said the annual celebration of Egboro day celebration in Ijebu-jesa land has been with us for quite a long time now. This year the celebration he says is special because it coincides with the anniversary of his second year on the throne.

The people in associations or societies all around states in the country and abroad collectively he says, deemed it fit that as an educated King in this modern world, I should live in a befitting modern palace with tarred roads and buildings with good architectural design and provided with modern day amenities.

In this respect the King says this year’s Egboro day celebration will commence with seven days inter-denominational prayer sessions organised by the Christian Association of Nigeria(CAN), Ijebu-jesa Branch. He says this will hold between 1st to 7th November, 2019 at the King’s palace.

On the 7th of November, 2019 a church service will be held for peace to reign in the land and for a hitch free Egboro day celebration in addition to other social events to bring the people, young and old together to celebrate the coronation anniversary with him.

On the 9th of November, 2019 which is the grand finale of the celebration, His Royal Majesty says, sons and daughters of Ijebu-jesa will launch a thirty million(30 000 000M) naira fund raising appeal for the construction and renovation of the king’s palace as first phase of the one hundred million(100 000 000M) naira budget for the project.

On the launch day, the King says the people will accompany the King and his chiefs from his palace to the launch ground at Ijebu-jesa Grammar school.

As regards funding the huge project, the King says he has informed and invited friends, people, association and society groups and well meaning Ijebu-jesa sons and daughters about the total cost and the need for their financial support to actualise the project in good time.

He says money raised at this year’s launch will not be enough to complete the project, but it is a good take off money for the work. He however hopes to launch the project again next year to raise more money.

As to question on the meaning of the appellation attached to his name, ‘Abikehin Ekun’ “I am called ‘Abikehin Ekun’ because I am the last born of my father and Ekun, the name for lion means a fearless, bold and powerful ruler,” he said.

His Royal Majesty was enthroned as Agunsoye the second of Ijebu-jesa land on 7th November, 2017. He thanked Otunba, Asiwaju Rotimi Obesun for coming home to establish a radio station and many of his privately owned companies, factories and industries in Ijebu-jesa for the growth and development of the people and the land.

He thanked individual and groups of people living or dead whose immense contribution and support made Ijebu-jesa great today. The ancient town has an International market, High Court, the legend I.K.Dairo Civic center, Solar street light, a beautiful palace, good roads and a host of other achievements.

The King wants peace, growth and development for the people and Ijebu-jesa during his rein. This he says can only be achieved if all well meaning sons and duaghters within and outside country come home to establish factories, companies and industries to creat employment and business opportunities for young college graduates of the town.They can also come together to support and enpower the poor with small and middle scale businesses to enable them earn a living to care for their families and improve their own lives.

The King said he has used is position as the president of the Ijesa North Oba's Council to publicise the Egboro day 2019 fund raising event.

"I have travelled within and outside Nigeria to inform and invite notable people for the epoc making 2019 Egboro day celebration and they all assured me they will honour my invitation with their presence and financial support," he said.

His Majesty thanked leaders and members of Clubs,Associations and Societies in Ijebu-jesa who through their collective support contributed immensely to the growth and development which today made Ijebu-jesa a tourist attraction, a business hub, a new home and town for its people,non indegenes and even foreigners alike.

Peoples' public reaction during the interview expressed the great love and respect they have for the monarch.

The King prayed for the people, the town, Osun state, Nigeria and the success of the up coming 2019 Egboro day celebration.

His Royal Majesty says Ijebu-jesa has been peaceful since he came on the throne. He says his love for the people rein suppreme, he urged the people irrespective of where they come from or whether you are rich or poor to live peacefully, united and in love for the growth of the land.

In the palace court the King says to enhance justice, fair play and peace, we are more interested in bringing friends, families,married couples and people together for peace in resolving conflicts rather getting interested in finding faults to punish the guilty or offender.

On his relation with the traditional chiefs of the town, the King says, "The relationship between me and my tradtional Chiefs is cordial and awsome. They have all been supportive since i came on throne,"he said.

On his take on politics as to which party he belongs, His Royal Majesty says, "As a King i belong to all the parties in Nigeria and it is my policy, i don't differenciate people, render favour or service or extend love to people based on which party he or she belongs. All we want from anybody or party in power is hard work and faithful service for peace , unity, growth and development of Nigeria and all Nigerians.