The Grandfather of All Sins 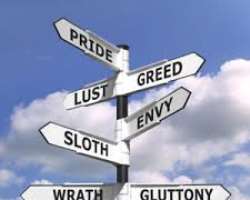 In Catholic Churches all over the world this Sunday, the central theme was pride. Pride is theologically recognized as the ancestral father of all sins. Pride is so distasteful to God that it is the one sin for which God shows no patience. The punishment for pride begins right here on earth. Pride it seems is the one sin punished immediately by God. It is not tolerated by man either, except by sycophants leading a proud person on, to their ultimate destruction.

The first reading this Sunday in all Catholic Churches around the globe was taken from the book of Sirach (35: 12-14, 16-18). The book of Sirach also known as Ecclesiasticus by the way, is one of my favorite books in the entire bible. In today’s readings Ben Sirach the author, warns people in authority not to oppress the weak. He warns that God is not partial neither will he ignore the pleas of the orphan or the widow when they cry out. The prayer of the humble, Sirach warns, “pierces the clouds….and the Lord will not delay till he crushes the loins of the unmerciful and repays vengeance on the nations….”

The second reading was taken from the second book of Timothy, precisely 2 Timothy 4:6-8, 16-18. Here Paul the son of a pharisee and a murderous pharisee enforcer, who was temporarily blinded and turned into a vessel of evangelization by the Son of God and God himself Jesus Christ, declares emphatically that he has finished his race and is awaiting the prize reserved for faithful servants of God. The Gospel reading was Luke 18:9-14 which is Jesus Christ's famous parable of the Tax Collector and the Pharisee.

At my local parish, the gospel was read, and the sermon preached by the deacon, Reverend Bob M. (surname withheld), a permanent deacon. Unlike temporary deacons who are celibate seminarians on the last lap of their race towards final ordination into priesthood, permanent deacons are non-celibate liturgical assistants to priests. Permanent deacons are mostly elderly, often retired family-men.

Apart from assisting priests (i.e. consecrated reverend fathers) liturgically during mass, permanent deacons also assist priests by undertaking delicate responsibilities which celibate priests are not experientially equipped to provide. What worldly advice would you expect a young newly ordained priest to provide to a middle-aged married couple experiencing difficulties in their marriage?

Would you expect a priest advising a couple with a dysfunctional marriage to tell the man, “look here bro, whenever you are at it, take it that you are sitting for an internal examination. With women, a man is as good as his last performance. When she is approaching the critical moment, you must hit it very hard as if your whole life depends on it. Show no mercy bro. Women can’t resist a man who hits it very hard with ferocious stamina at the right time and right moment.” Surely a disciplined and pious priest eager to promote the coming Kingdom of God is not well equipped to give this kind of worldly advice.

Indeed, only a wizened permanent deacon’s wife will be able to tell a woman in a troubled marriage, “ma’am, men have a dual nature. One part of a man, the publicly exposed part, is lofty, rational and reasonable. The other part of a man, the base, hidden part, is primal, sexual and irrational. You can only expect to influence the lofty, rational and reasonable part of a man by surrendering and yielding to his baser unreasonable part, whenever the animal in him is unleashed in private. You can never achieve this by refusing him when you are not in the mood or by giving him the length of your tongue when you are aggrieved or feel neglected.”

These kinds of worldly things, appealing to the hidden, often suppressed baser instincts of men and women, cannot be taught in a seminary, dedicated to overarching spiritual issues. However there are two very critical functions of priests (ordained reverend fathers) that deacons whether temporary or permanent cannot fulfill.

Deacons cannot consecrate the offerings in a Mass and transform them by their blessings and priestly utterances into the body and blood of Christ to be distributed as communion to the faithful. Therefore, deacons cannot say Mass alone. They may lead communal prayers but not say Mass. Also, deacons cannot hear confessions and forgive peoples sins in confession. They simply do not have the Petrine power and ecclesiastical authority to forgive sins, which is solely and exclusively reserved to consecrated, ordained Catholic priests (reverend fathers).

Deacon Bob started his great and outstanding sermon this Sunday by explaining how pride is the singular sin most offensive to God. He told the spell-bound congregation (I am paraphrasing him here), “look, never once in the entire Bible, I repeat, not even once, did Jesus Christ, the Divine Son of God and God himself, rebuke tax-collectors, prostitutes and sinners. But he publicly rebuked the Pharisees, Sadducees and scribes, the so-called elites, severally and very harshly. Why? The reason is pride and a sense of pre-entitlement.”

[ Writer’s note: Let us take a slight detour at this point, first by refreshing our memories with what Jesus Christ said to the woman caught in the very act of adultery.

“Then Jesus straightened up and asked her, ‘woman where are your accusers? Has no one condemned you?’ ‘No one Lord,’ replied the woman. ‘Then neither do I condemn you,’ Jesus declared. ‘Go and sin no more.’” John 8, 10 -11. Note how she escaped with an admonition and not a condemnation.

Compare and contrast this with Jesus Christ’s admonition about obedience to constituted authority and particularly his condemnation of the scribes and Pharisees in a few of the seven woes.

“The scribes and the Pharisees have taken their seat on the chair of Moses. Therefore, do and observe all things whatsoever they tell you but do not follow their example. For they preach but do not practice.” Mathew 23, 2-3

“Woe to you scribes and Pharisees, you hypocrites. You lock the kingdom of heaven before human beings. You do not enter yourselves, nor do you allow entrance to those trying to enter.” Mathew 23, 13

“In the course of his teaching he said, Beware of the scribes who like to go around in long robes and accept greetings in the marketplaces, seats of honor in synagogues and places of honor at banquets. They devour the houses of widows and as a pretext, recite lengthy prayers. They will receive a very severe condemnation.” Mark 12, 38-40

“Woe to you scribes and Pharisees, you hypocrites. You are like whitewashed tombs, which appear beautiful on the outside, but inside are full of dead men’s bones and every kind of filth. Even so on the outside you appear righteous, but inside you are filled with hypocrisy and evildoing.” Mathew 23, 27-28. ]

Pride, Deacon Bob reminded us in the congregation is the sin of ascribing glory to one’s self and not to God who oftentimes works through others to enable us mortals achieve great feats. Pride he said is the one sin that led to the disobedience, rebellion and fall of Satan also known as Lucifer. Pride he stressed is the one sin from which all the other sins in life flow.

Deacon Bob did not explicitly say so, but thinking about it now, it seems pride manifesting in the form of unbridled ambition (not accepting one’s divinely prescribed station in life) led to the original sin of disobedience. It was the sin of pride, of wanting to be like God in knowing the difference between good and evil and thereby wanting to rub shoulders with the Divine Creator, that led to the fall of mankind’s ancestors, Adam and Eve.

By choosing the weakest to accomplish the greatest deeds, God often leaves no one in doubt that he, God is the primary source to which all glory and thanksgiving for human achievement is due.

Deacon Bob preached that it was precisely the reason why in the prayers of the two Pharisees in this Sunday’s readings in the Catholic Church, one (Paul’s in 2 Timothy) was accepted while the other Pharisee’s prayer (in Luke 18, 9-14) was rejected by God.

Paul seemed assured although not boastful about his place in the Kingdom of God which he ascribed to the strength given to him by God. The other Pharisee, who did all the right things it must be conceded, justified himself by those same deeds and by so doing lost all merit.

Let us conclude by relating a parable which Deacon Bob recounted to us this Sunday to great laughter and general appreciation. This apparently simplistic parable is more profound than it would initially appear. Dear reader please take the time to read this inspired parable carefully, over and over again, in order to discern its inner meaning which perfectly illustrates the mechanism of Divine Salvation and God’s Final Judgement.

Paraphrasing Deacon Bob here, “two people were involved in a very fatal accident which led to both losing their lives instantaneously. One was a deacon, while the other was a taxi-driver. Both arrived at the same time at the Pearly Gates. St. Peter who holds the key to the Kingdom of God was there to receive both men. He beckoned to them, ‘follow me.’ And they went inside the eternal kingdom.”

“On getting to a beautiful, posh luxurious villa with several exquisite limousines parked outside, Peter said to the taxi-driver, ‘this is yours.’ The taxi-driver said, ‘Wow. Sir you mean I get to drive these beautiful cars? I assure you I will drive them very carefully and take great care of them for you Sir.’ “

“Peter said to the incredulous taxi-driver, ‘I mean this compound and everything in it is yours forever.’ The driver fell to his knees in stupefied thanksgiving.”

Peter then said to the deacon. “‘Follow me.’ The deacon followed him. Peter led him to a rather modest bungalow. It was beautiful in its own way but nowhere near as grand as the one given to the Taxi-Driver.”

“‘This is yours,’ he told the incredulous deacon. The deacon raised his hand in surprise. “Well Sir, I think you may have made a mistake. Maybe there is an error somewhere. Maybe you mistakenly swapped our villas. No this cannot be for me.’ “

Peter told him, “no there was no mistake at all. We do not make mistakes here. Everything we do here goes by results achieved in life.”

“Your sermons in church led many to sleep, while the taxi-driver’s driving led many to pray.”