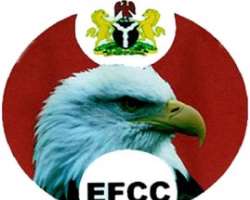 The Port Harcourt Zonal Office of the Economic and Financial Crimes Commission on Friday arrested a fake IBRAHIM MAGU who has been using the name of the EFCC boss to harass and blackmail bigwigs at the Niger Delta Development Commission for bribes to ‘Kill’ phantom corruption investigations.

Robert Swem Terfa was arrested in Juanita Hotel, Port Harcourt, Rivers State where he was holding a meeting with some Directors of the NDDC over a phony offer to remove their names from the list of individuals being investigated by the EFCC.

The impostor allegedly contacted the Directors claiming to be representing the EFCC Chairman.

He reminded them of the forensic audit of the accounts of the NDDC ordered by President Muhammadu Buhari and assured them that their names would be removed from the audit.

He would be charged to court as soon as investigations are concluded.

In a related development, a daring syndicate of internet fraudsters, who used a cloned document of the EFCC as well as forged signature of the acting chairman of the agency, Ibrahim Magu, to defraud an American Lady, has met their waterloo.

The four-man gang was nabbed on Friday in a coordinated operation in Delta State by the Benin Zonal Office of the Commission.

The quartet was arrested sequel to intelligence obtained from their victim, Patricia Dewan Walker, a 60-year-old American.

They are alleged to have defrauded Walker of an aggregate sum of $850,000 in dating scam.

To further hoodwink Walker to part with more money, the syndicate in 2017 forwarded forged documents and letters, including a fake letter of guarantee from EFCC and purportedly signed by the Chairman, Ibrahim Magu and one Yomi Balogun. whom they claimed is the Head of Operations, Lagos.

In the said letter, the syndicate told their victim to pay $157,000 in order to receive “your consignment boxes in our custody of $10 million and another $3 million deposited in our office few days ago by OFAC”.

Items recovered from the suspects include forged documents, including “Payment Guarantee” from the Office of the President of Nigeria and mobile phones.

The suspects have confessed to the crime and will be charged to court as soon as investigations are completed.