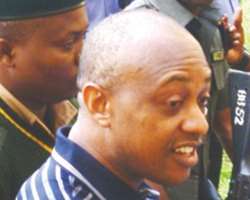 Alleged abduction kingpin, Chukwudimeme Onwuamadike aka 'Evans' has opted for a plea bargain with the Lagos State Government over his attempt to kidnap a leading transporter in Lagos.

The Defence Counsel to Onwuamadike, R.B.C. Eke, made the disclosure during proceedings at an Ikeja Special Offences Court on Friday.

Onwuamadike, popularly known as Evans is standing trial for his failed bid to kidnap Chief Vincent Obianodo, the Chairman of Young Shall Grow Motors Ltd., one of Nigeria’s leading transport companies.

“We received a plea bargain application on behalf of the fourth defendant dated October 24, which is yesterday and we received same yesterday,” Akudo said.

Responding Eke said that “the development (the fourth defendant’s plea bargain) came from us and the Directorate of Public Prosecutions (DPP) will be hearing from us.

“We have the intention to also file a plea bargain on behalf of the first defendant (Evans),” he said.

“We have no problem with the court defendant’s plea bargain agreement,” Josiah said.

Arinze and Ubong had no legal representation in court.

NAN reports that proceedings for Evans’ two criminal trials– the attempted kidnap of Obianodo and the kidnap of Sylvanus Ahamonu, which were scheduled to hold on Friday were stalled, due to the absence of Insp. Idowu the Investigating Police Officer.

Explaining Idowu’s absence, Akudo said: “unfortunately we do not have our witness in court. He is outside jurisdiction”.

He added: “My lord, we will definitely do the needful during the next adjourned date.”

Responding Justice Oluwatoyin Taiwo said: “your witnesses have not been coming to court. This witness is the IPO and he hasn’t finished his testimony.

NAN reports that in the Obianodo case, Evans and his three co-defendants face a seven-count charge of murder, attempted murder, conspiracy to commit kidnapping, attempt to kidnap and sales and transfer of firearms.

According to the prosecution, Evans, Emeka, Arinze and Ubong committed the offences on August 27, 2013 at Third Avenue in Festac Town, Lagos.

Evans and his accomplices are alleged to have killed one Ngozi Chijioke and attempted to kidnap and kill Obianodo.

The prosecution also alleged that in 2008, Ubong sold and transferred two AK47 rifles and 70 rounds of live ammunition to Evans.

In the Ahamonu case, Evans and his co-defendant, Victor Aduba, a dismissed member of the Nigerian Army face a four-count charge of kidnapping and unlawful possession of firearms.

Evans and the dismissed soldier are accused of kidnapping Ahamonu, holding him hostage for at least nine weeks and collecting a ransom of 420,000 dollars from his family.

Taiwo adjourned both cases to December 9 for continuation of trial.