Ikedi Ohakim : How Not To Be A Political Leader (part 2) 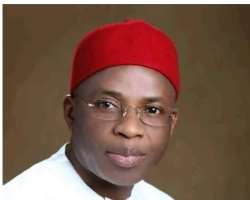 Recently, I wrote an article where I said I heard 'kepukepu' that Dr Ikedi Ohakim, a former governor of Imo State was eying the position of President General of Ohaneze Ndigbo. I said since he was dethroned as governor which was perhaps due to his still soaring infamous stubbornness, Ohaklm has been doing everything humanly possible to be relevant, especially by being in the news.

I told everyone that i'm not gunning for the man of Burma Estate for the position of President of Ohaneze Ndigbo. But that this is my personal opinion. Agreed that every Nigerian is entitled to vote and be voted for in any election but we should be able to draw a clear line between jesting and genuine ambition.

Ohaneze Ndigbo fights for the welfare of Ndigbo. The organization as part of its objectives of creation is to foster unity among Igbos in order to better allow them to be representative within the political scenario of Nigeria. An Ohakim who didn’t focused development initiatives in his part of Isiala Mbano when he was a governor is not fit to fight for the welfare of Ndigbo. He also woefully failed to touch the lives of the people of Okigwe zone when he was a governor. This man is not even concerned about the welfare of his followers. President of Ohaneze Ndigbo certainly is not for a political leader who is not concerned about the welfare of his followers. Leaders depend on the trust and loyalty of their followers.

Since I wrote the article, IKEDI OHAKIM HOW NOT TO BE A POLITICAL LEADER, i have observed that a tiny minority of Ohakim's media are already busy casting aspersions on me for talking against the former governor. Without a doubt, a tinier minority from this tiny minority are doing so either from pure ignorance of what is happening or just to force me to keep quite.

Some names they call me are blackmailer, begger, tout, jobless man. And they are fabricating mails where they say I acknowledged receiving help from Ohakim. This tiny minority needs a crash course on basic logic. If you feel I'm jobless, then give me a job. I hold a masters degree in Linguistics and communication studies. ICAN is in view. I am also fortunate to after graduation in 2001 got employed as accounts officer of Alcon Nig Limited in 2003, promoted to Accountant in 2005 and worked in the company till May 2016. I got another job in 2018 through Rt Hon Opiah from where I left to something else. So if you term me jobless, then give me a job.

Of course, those calling me names for pointing out the deceptive nature of Ohakim are only his leeches who don’t enjoy the truth slimed down their faces. No doubt, they need to live in denial to justify their fealty to filth.You can pummel truth with all sorts, but when things clear up, only truth will remain standing. As a bearer of truth, i need no encouragement to stand by it so those who continue to murmur grudgingly against me need not worry. The truth remains that President of Ohaneze Ndigbo certainly is not for a political leader like Ohakim who is not concerned about the welfare of his followers. Ohaneze fights for the welfare of Ndigbo while Ohakim is only concerned about himself and his children. I followed him from 2008 to 2016 and when I was down in 2017, he ran away. Same thing he did to Jones Onwuasonya and many more. Have you asked yourselves why at the smallest chance, he nominates himself, his wife and children for appointments leaving his supporters to grumble.

When things go wrong i must talk. I hate deception. When politicians were spreading all the lies against Ohakim in 2010, I was one of those that shouted that this man did not do the evil they said he did. I did my investigations then and saw the lies and I shouted that this man was misunderstood, misconstrued and deliberately misrepresented in some quarters. I saw the massive conspiracy to denigrate his person and defame his administration. I spoke against some of the ‘moonlight tales’ spread about him. People called me all sort of names for speaking in favour of him. Today same Ohakim is calling me names for telling him the truth .

One of the beauties of democracy is the existence of liberties,including but not limited to freedom of expression.This right include the freedom to hold opinion and propagate same,within the set limits. The FOI Act has also expanded this right. Ohakim's media calling me names in respect of the exercise and enjoyment of this right amounts to iberiberism