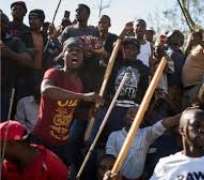 A statement on Wednesday by the Head of Media Unit of NIDCOM, Mr Abdur-Rahman Balogun, quoted Mrs Dabiri-Erewa as speaking against the backdrop of renewed xenophobic attacks on Nigerians.

Quoting Mrs Dabiri-Erewa, the statement said: “The Consul-General, Godwin Adama, is on top of the situation. He is currently in Widbank, Mpumulanga, where the crisis happened. He is at a meeting with the highest police authorities there.

“The mission intervened immediately and the situation is currently under control.

“After this meeting, a meeting with Nigerians along with the South African Police will hold.”

The NIDCOM chairman said further developments at this stage would be taken up at the ministerial level, between the two ministers of Foreign Affairs of both countries.

President Muhammadu Buhari was in South Africa between October 3 and October 5 on a state visit, which coincided with the xenophobic attacks on Nigerians.

Series of agreements and Memorandum of Understanding (MoU) were signed by the two African states to cement the relationship and nip the hostilities in the bud.