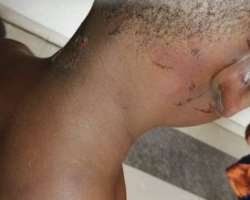 A 33-year-old woman, Dayo Korede is in trouble for allegedly inflicting injuries on her step son with hot iron.

The Chairperson of Ekiti State chapter of the Federation of Women Lawyer FIDA, Mrs Seyi Ojo, confirmed the arrested of the of the woman.

The suspect was said to have married the father of the young boy when he separated from the mother of the boy.

The FIDA chairperson said the woman had been maltreating the boy as reported by the school that the boy attend.

Ojo confirmed that the woman had been taken to the Okesa police station and she would be charged to court to serve as lessons to others.

While speaking, the suspect said she was only trying to train the boy to be strong.

The scars of injuries are obvious all over the body of the little boy who lamented that he had suffered maltreatment in the hand of the woman for a long time.