Kogi Crisis: When the Mace of Impunity is Married to the Wig of Shame 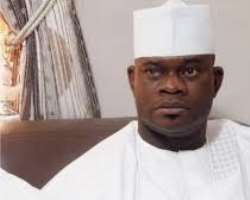 Kogi State in recent times has become the heartbeat of political comedies and tragedies in Nigeria. No sad and hilarious news is complete in Nigeria until Kogi State is included. Unfortunately, the beneficiaries of these shows of shame are not relenting in promoting the ugly state of things in our clime. From the news of a Governor falling from his car while throwing money in the air in the gory street of Lokoja, to the crashing down of the Helicopter conveying the Vice President for a political campaign in Kogi State; and from the gory tale of 5 out of 25 members of Kogi State House of Assembly purportedly removing the Speaker of the House, to the ridiculous story of a governoship Aspirant parading a white foul in a siren blaring convoy, etc, Kogi has become not only a hall of shame and a theatre of sorrow but also a confluence of political confusions.

Though constituted by the Chief Judge of Kogi State in disobedience to a Court order, the Panel exonerated Achuba in their report that was submitted to the Kogi State House of Assembly on Friday, the 18th day of October, 2019. Despite the exculpation of Achuba by the Panel's report, the Kogi State House of Assembly in the most bizarre manner unprecedented in the history of this nation, organized a mock sitting to commit what can be described as constitutional terrorism by purportedly impeaching Achuba within 30 minutes of the receipt of the Panel's report! If the uncommon speed that was exhibited by the Kogi State House of Assembly in the unconstitutional impeachment of Simon Achuba can be exhibited in other issues of public importance, Kogi State would have been better than Washington DC! Ironically, when it comes to matters of public interest, the government and its apparatus move at the pace of a snail but when it has to do with sinister agendas, they move at the speed of light! Whichever way one wants to look at it, what the Kogi State House of Assembly did in collaboration with the Kogi State Chief Judge is worst than a military coup. Being a broad day attempt to forcefully overthrow the Deputy Governor of Kogi State through resort to self-help, the action taken by these two infamous players in these unwarranted acts of terrorism against our Constitution, can favourably be likened to treasonable felony. The shameful show of might over Achuba by the powers that be as it were in the state of nature, underscores the delinquent and lunatic disposition of the current administration.

I don't intend to cite laws and or cases in this article but, for the records, I shall cite the provision of section 188(8) of the Constitution of the Federal Republic of Nigeria, 1999 (as amended). It provides:

"Where the Panel reporty to the House of Assembly that the allegation has not been proved, no further proceedings shall be taken in respect of the matter". (Emphasis mine).

It is no longer news that the Panel's report carries a verdict of not guilty in favour of Elder Simon Achuba in all the allegations that were leveled against him. Thus, by the above constitutional provisions, the Panel's report ought to have terminated the whole impeachment proceedings that was initiated by the Kogi State House of Assembly. Unfortunately, the House resorted to self-help by ignoring both the Panel's report as well as the provisions of the Constitution in respect thereof and purportedly impeached Mr. Achuba. This singular act of lawlessness can be described as a "legislative coup". In view of this gross violation of the Constitution by the Kogi State House of Assembly, everyone expected the Chief Judge of Kogi State to distance himself from the swearing in of Edward Onoja as the new Deputy Governor. This is because, apart from the fact that the same House of Assembly together with the Kogi State Governor had earlier this year tried to remove the Kogi State Chief Judge himself, the very fact that the report of the Panel set up by him was totally ignored and thrown into the wind by the desperate members of the House of Assembly, ought to have spoken to his (Kogi CJ's) conscience enough to such an extent that he should not have been seen promoting unconstitutional and illegal act of swearing in Edward Onoja. Unfortunately, the Kogi Chief Judge did the contrary. He robed in himself in full ceremonial wear as a Jurist, and with a Wig on his head, swore in Edward Onoja as the new Deputy Governor of Kogi State. Here is a Chief Judge who was ordered out of the Government House earlier this year during the swearing in of the Grand Khadi of Kogi State by the Governor of Kogi State, now doing the biddings of the same people who orchestrated his woes in the same venue where his public embarassment took place!

Today, both the members of the Kogi State House of Assembly and the Kogi State Chief Judge are happily married on the altar of illegality and unconstitutionality. They will go down in history not only as the first actors that led to the first impeachment of a deputy Governor in the history of Kogi State, but also as the greatest attackers of our most cherished rule of law in the history of our nation. While their marriage of convenience lasts, I call on Mr. Achuba to be of good cheers over his recent divorce from his erstwhile political spouse in respect of a political marriage which has broken down irretrievably. Interestingly, the Chief Judge of Kogi State who administered the Oath of Office that joined Achuba in a political matrimony with Governor Bello, is the same man that administered the new Oath of Office which has perpetually set these political couples apart! When the gods shall belch, all the officiating ministers in the new political marriage that took place in Kogi State on the 21st day of October, 2019, should get ready to weep on the altar of nemesis. Until then, let me save my ink and watch the world!

( Akobe O. Akobe is a Political Analyst and writes from Abuja)