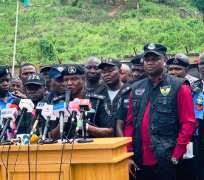 The Nigeria Police today, Paraded 81 Deadly criminals apprehended by the IGP Intelligence Response Team Led By DCP Abba Kyari. They include Kidnappers, Armed Robbers and Other Criminal elements Terrorizing the country with their evil trade.

Among the arrested criminals are the Kidnappers who killed INSPR Yohanna Patrict and Kidnapped Some other innocent Nigerians Along Abuja-Kaduna Expressway on 26/8/19 Killed .

Others are the Kidnappers that killed 4 IRT Personnel in Kaduna State in August Last year and 3 of the Rifles belonging to the late IRT personnel were recovered from them.

Arrested and paraded were Kidnappers that Kidnaped a Sokoto Business Man Alh Tukur Subaru and Collected huge Amount Of Money for his release.

Paraded today were Kidnappers that Kidnapped an Honorouble Member in Sokoto State and Many Other kidnappers Terrorizing Abuja-Kaduna-Kano express way, Niger and Taraba.

All the Deadly kidnappers and Armed robbers that Confessed to their Crimes were Paraded before the Press today 21/10/19 by the Force Public Relations officer (FPRO).

DCP Abba Kyari has expressed gratitude to IGP Adamu Mohammed for enhancing the enabling environment for the operations to thrive. He warned criminals operating in Nigeria to desist from their activities or he will go after them and bring them to justice.