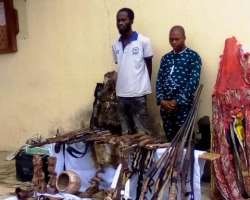 The suspects were arrested by the Special Anti Cultism Squared of the command. They were accused of murder, kidnapping and unlawful possession of fire arms.

The Commissioner of Police in the state, Mrs Abiodun Ige told The Nigerian Voice that the prime suspect, Akerele was promoting criminal gang that constitutes threat to the security of the state.

She said explained that there have been several letters of complaint against Akerele and that he was invited by the police but he didn't honour the invitation and that he had been evading police arrest.

The police boss said the suspect allegedly murdered one Sunday Ogoja at a forest reserve near Orile-Owu on 14th of November, 2018 and also killed one Abiodun Rasaq Akande at Aremo Royal Hotel, Orile-Owu on 12th of July, 2019.

The CP added that on 19th of September, 2019, assorted weapons were found in the house of the suspect at Ikoyi in Isokan local government area of the state during a search on the house by the police.

The CP commended the Special Anti Cultism Squared and assured that the suspects would face the full wrath of the law.