Nigeria; what are we borrowing these trillions for? 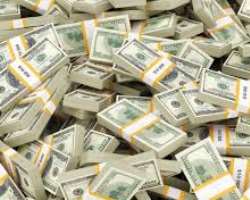 So is it news that we have roads that have collapsed or that the roads are no longer there, that you fly several hours and land Nigeria with minimal jet lag, but travel four and five hours for a journey that ordinarily is two hours and thirty minutes, with check points that punctuate the journeys on very bad patches of the road.

On the Abuja-Jos or Jos-Abuja road it is sheer pain, intact the alternate route has collapsed from the Kaduna axis, and the Akwanga-F/Karshi route is also going the same way. Our roads whether in Lagos, Benin, Kogi, or in many a case intra city roads are not simply bad but they are excruciating and killing pain driving on them. These are roads that you do not just avoid potholes, but roads that you choose which holes that are fairly okay.

Did I complain above about roads, then it is not news that our health system is almost non existent, we do not have the capacity for any large scale breakout of any disease, we are not ready for malaria, how can we tackle ebola or chicken pox when 776 local governments, thirty six state capitals, all we boast of is actually a handful of Specialist Hospitals that are only special in name, and Teaching Hospitals that teach and tutor medical doctors that are preparing to leave the country because even the doctors are poorly treated. Clinics are but mere consulting pharmacies without drugs and the Okoro's Chemist is patented for drugs that we do not know the source.

So no good roads, and then someone somewhere dare mute the idea of tollgates on roads that are barely motorable. Then no hospitals, the citizens die because of a lack of affordable healthcare. Then next point, does the figures of out of school children bother anyone, or we just flaunt those figures for figurative use, does anyone know the implications in just a few years on the system having an uneducated populace...How about the graduates that in introduction tell you that they are ex-corpers, and cannot do a '30-minutes' pitch of who they are and what they want out of life. Is it news when the state of primary school facilities are increasingly scary, leaking roofs when there are roofs, and in many cases a total unavailability of the classrooms themselves.

So no good roads, no healthcare, and then education is poor, how about sports, well, lets not reduce this conversation to a pedestrian level but the National stadium Abuja tells the story like the National Stadium Surulere concludes it. Do Nigerians enjoy portable drinking water, how about electricity and then what is the status of security, who do we hold responsible, from the Local Council chairman, across to governors, of the Federal government that may soon introduce oxygen tax if left to their whims and caprices, no one is held accountable.

If we are not abducted, kidnapped, we are killed by raving reckless drivers of tankers, or business owners who in order to maximize profit buy dead trucks and long vehicles or we them resort to suicide by scooping fuel by a live fire.

In the above paragraphs I am not sure that I have exactly said something that is new, but here is the point, how is it that our leaders either are oblivious to these issues, same issues and problems they promise to address while campaigning, and same they soon turn their backs to, and then I ask how do they sleep, how do they have conversations to pay civil servants N30K (not that the servants are civil) when that is a meal in some posh restaurant for many of them...many things one would never understand about leadership in Africa's biggest black population and this leads me to my concluding submissions.

With such huge infrastructural deficit, and an amazingly embarrassing absence of amenities the following is what is on ground, a debt profile that has rose from N24.95 trillion to N25.7 trillion in the last three months.

With government having paid more than N800 billion in servicing the multiple obligations, which cut across domestic and foreign deals in the first half of 2019, and with the deficit plans in the ongoing 2019 budget, analysts say that the country’s debt could hit N27 trillion by the end of the year. According to reports in national daily The Guardian, "The debt sojourn has appeared endless amid a shallow diversification and economic challenges. Besides, the proposed 2020 budget has more than an N2 trillion deficit to be financed by further borrowing."

If it wasn't bad or a case of worst getting even worse domestic indebtedness of the 36 states and the Federal Capital Territory (FCT) as at the end of March 2019 was N3.972 trillion, according to the Debt Management Office (DMO).

The debt profile includes the more than N600 billion bailout fund which President Muhammadu Buhari gave to states in 2016 in the wake of falling oil prices at the international market. The states had complained that they were unable to pay salaries and meet operational costs.

With these kind of figures one would expect to see crazy and mind boggling infrastructural work going on in every corner of the country, but on the contrary states cannot meet their salary obligations, social safety nets are not working, and politicians are bloating on the system. We keep saying that the problem is not borrowing, but what exactly is the monies being spent on.

Let me end that all these happenings are possible because we the people have refused to hold leadership accountable, we are as always divided even in expectation, and feeling good about government, which in itself is like looking on the bright side of catastrophe, when we quit looking on the bright side the catastrophe is still there, if this is the next level, a tumble on the stairs is inevitable, but in Nigeria the saying that he that is down need fear no fall is appropriate but for how long—Only time will tell.