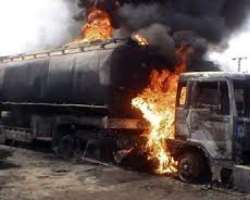 Onitsha, 18th Oct 2019: ‘medicine-after-death’ and crocodile tears which have thickened as response approaches to humanitarian emergencies or disasters by public office holders in Nigeria or any part thereof, particularly in Anambra State, must end. Public governance including responses to emergency situations in democratic setting must no longer be handled as ‘playing politics out of human miseries’ including turning the scenes of the miseries into ‘political pilgrimage’ where “remedies of the graveyard” are offered and crocodile tears shedded.


The failed prevention of the referenced inferno, therefore, defies excuses of whatever description or names called. Government of Anambra State must own up and take full responsibility. That is to say that ‘sympathies’ expressed by the State Government and other political office holders including Senators and House of Rep members from the State as well as the Federal Government of Nigeria are nothing short of ‘tears running down from the eyes of the crocodile.


It saddens our heart that democratic governance in the State has been reduced from ‘service to humanity and society’ to “service to the clique’’; a sort of ‘organized cartel in a democratic setting’. Truth be told, the Upper-Iweka/Ochanja Market inferno is easily quenchable had the present Government of Anambra lived up to its governance responsibilities particularly in the areas of functionality of Government service machineries, early warning and emergency rapid responses.

That a fire outbreak that originated from a leaking fuel tanker near Toronto Hospital at Onitsha Upper-Iweka could travel half a kilometer or 500 meters, if not more, to engulf several, if not hundreds of trade stalls filled with billions of naira goods as well as several high rising commercial buildings; is totally a clear sign of failed administration and its emergency rescue or intervention responses.

The inferno, which destroyed goods and services worth billions of naira with no fewer than eight lives lost including late Mrs. Ifeoma Nwoye and her infant child; also exposes rabid and rapacious corruption shaking the foundations of various market leaderships in the State. From records, there were original facilities provided for market fire service in a number of markets in Onitsha and environs including Ochanja, Relief, Building Material and Niger Bridgehead Markets as well as the Onitsha Main Market, but for rabid and rapacious corrupt practices leading to selling and conversion of those facilities into lock-up stalls and laying off of their fire service procured vehicles till date.

Same rabid and rapacious corrupt practices have played a key role in total absence of Government cemeteries in Onitsha and environs till date; be they State or Local Government owned. The previously existing ones carved out and maintained in the 70s and 80s were sold by successive State and Local Governments to the authorities of Catholic and Anglican Churches which were swiftly converted to church buildings. There also used be Onitsha Zonal section of the Anambra State Fire Service, located along Obodo-Ukwu Road, near Onitsha, which is now partly or totally converted to a motor park.

Another factor found to have aggravated the referenced inferno is blocked drainages. The fire was able to travel through gutters for 500 meters to engulf the outlet of Ochanja Market owing to blocked gutters and drainages. The original drainages and gutters linking the first scene of the inferno (Upper Iweka) were so deep and well paved that their depth is measured six feet below the surface. Today, they have got completely blocked and filled up debris following Government’s poor waste management and traders’ non challant attitudes. It has become so bad to the extent that traders of Ochanja Market now trade on filth; with gutters filled up and converted to trade spots.

Poor road facilities or accessibility also majorly contributed to failure in quenching the inferno. It also prevented facilitation of independent interventions by ‘Good Samaritans’ including owners or drivers of human waste (excreta) and water tankers. Only very few were able to make it to the scene to pump their water and excreta inside gutters to quench the fire. Instead of ensuring round-the-clock attention to the state of roads in the State including city, intercity and trunk B roads, it is a ‘politics of road construction and maintenance’ by the camps of Obi, Obiano and Ngige”. This is despite the fact that Anambra State, apart from its soil and earth fragility, is also one of the most motorized States in Nigeria. The State is further flood prone; with 90% or more of its gutters and drainages blocked or filled with debris till date; forcing floods to wash or cut off the asphalted road network across the State.

The implication of the sad inferno is that all the markets and other major facilities in the State are not safe and secured from fire outbreaks especially in this coming dry season. If a fire outbreak could erupt and rage on for two days running without being brought to an end, then the State is not safe. This is more so when the number of the State’s ‘enemies within’ and ‘enemies outside’ is on steady increase. As at the end of business yesterday, fire was still burning some warehouses along Ochanja Market by Zik’s Avenue in Onitsha.

It is also not true that ‘angry mobs prevented personnel of the fire service’ from God knows where from quenching the fire. This is because no sensible member of the public would have engaged in such despicable act. The truth is that no Government Fire Service personnel and their functional tankers were sighted timely at the two scenes of the inferno especially at Ochanja Market. It was individual efforts from beginning to the end. Such efforts included use of excreta pumped inside gutters to prevent escalation.

Rather than mobilizing the Onitsha Cantonment Commandant, the Ogbaru Naval Base Commanding Officer and the crack teams of the State Police Commissioner just to visit the scene of inferno (Onitsha Upper Iweka), avoiding the Ochanja major incident scene, the Governor ought to know that it is far better to freely be and mingle with his own people than to address or speak to them while being ringed or walled by armed soldiers and police personnel.

Visiting and possibly harassing the boss of the near moribund State Fire Service and offering of miniature compensations to the victims are a height of ‘medicine-after-death’. Apart from impossibility of such minutest compensations bringing back the lives of no fewer than eight that died, the capacity of the State Government to reconstruct all the burnt numerous four-storey high rising buildings, the several, if not hundreds of stalls and ware-houses stocked with goods worth billions of naira is a clear act of impossibility. Same goes to those who have offered and about to offer compensations or “fire service vehicles”. They are all exponents of “medicine-after-death” and “crocodile tears” approaches.