Onitsha Fire: Time for govt to rev up its rapid response strategies- CLO 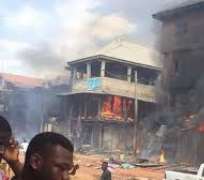 The Civil Liberties Organisation (CLO), South East Zone is to say the least, deeply saddened over the unfortunate petrol tanker fire that engulfed parts of Onitsha on Wednesday 16th October 2019, leaving in its trail, tears, sorrows and blood.

Our hearts goes out to those affected by the losses both in human lives, damage to properties and loss of goods and other valuables.

This is not the first time such is happening in Onitsha and would definitely not be the last but the reality is that the incident has brought to the fore the imperative need for the government and the relevant institutions to review its strategies and take drastic proactive measures.

Within the timeline of the Obiano administration in Anambra, there have been three serious major tanker fire incidents and pockets of other accidents of such type though with minimal number of casualties.

Petrol tanker fire accident that occurred within the same upper Iweka axis on Sunday 31st May 2015 roasted a record number of 69 persons to death at the first instance and others who later died in the hospital. The tragedy attracted the visit of Nigeria’s vice president, Yemi Osinbajo who was sworn into office barely two days then.

Without an existing public cemetery in Onitsha, Anambra state government had to borrow a church cemetery in Obosi many months later for the mass burial of almost thirty corpses who were not identified.

On February 15, 2017, another petrol tanker crashed into a Filling Station at DMGS Roundabout, Onitsha at around 7pm spilling its contents into the station and the adjourning streets and roads within the vicinity. By the time the dust settled after the whole vicinity was in flames, lives, goods, offices and various residential apartments were lost.

Few months back, another tanker laden with diesel also crashed into the Abuja Park of the same Upper Iweka axis. Though the liquid contents didn’t catch fire, many died from the accident while various vehicles were also damaged.

During the 2017 tanker fire incident at the DMGS, Onitsha, the Obiano administration made a serious publicity stunt out of the situation despite the fact that it was Asaba, Delta State Fire Service that rendered serious complementary service to save an already escalated situation.

Anambra State government gave cash donations to some of the affected people in the disaster and boasted that the government has procured state- of the -art fire fighting equipments. The government also said it has also ordered immediate demolition of all petrol filling stations built within residential areas (despite the fact that it was the same government that approved those stations abinitio).

Two years down the line, the last Wednesday incident has just brought to the fore the reality that it’s been much talk show without requisite action. Today in Onitsha, the commercial nerve centre of the south east, more filling stations have been built in residential houses including other congested areas like the same Upper Iweka . This situation is another tragedy in waiting.

The Anambra State Fire Service has been left poorer with enormous challenges to battle with. No wonder, the Fire Service people and their vehicle were nowhere to be seen three hours after the billowing fire was ravaging everywhere this time.

Enquiries and investigations by The CLO revealed that the manpower of the Fire Service in Anambra has been depleted without replacement and employment. Those who retired from the Service have not been replaced with new intakes to the extent that in few of the existing fire stations, only three people (a driver and two assistants) are working there.

The Fire stations operate with few refurbished vehicles while they don’t have water supply to the extent that they go to commercial borehole to buy water in cases of emergency.

With an outdated equipment and lack of personnel, the few remaining members of staff are demoralized with no insurance. In Anambra state, fire service personnel receive N10 as hazard allowance while the station managers receive N20, 000 as monthly impress to run their offices.

The residential quarters for fire service staff and training school located within Obodoukwu Road, Okpoko has been converted to a motor park with unconfirmed reports saying that it was sold out to a private individual.

One of the core attributes of good governance is Responsiveness. This entails that institutions and processes try to serve all stakeholders within a reasonable timeframe.

Unfortunately, without sounding immodest, this core attribute is lacking seriously in the Obiano administration. Public matters that require urgent government attention is often treated with levity while the personal interests of some influential persons and friends of government are treated with utmost dispatch and consideration. What an irony and paradox!

Onitsha-Owerri road few metres away to Upper Iweka is now a death trap with about eleven people already dead from container fall and vehicle accidents almost on daily basis there. Government will say that it is a federal road but their state revenue agents are busy collecting money from road users there. The state government doesn’t need any permission from federal government before it carries out palliative works or even ordinary sand filling of the area so that motorists can heave sighs of relief there. Other state roads are also in this same mess while government looks the other way.

Residents of Nkisi Aroli , off Awka Road, Onistha are living in fear. Gully erosion in the area has swallowed four houses rendering about 100 people homeless. They have cried out to the government but nothing has been done. Maybe when 20 or more dies in one fell swoop, the government will roll drums inviting the media to come and see how they will be taken care of with lifeline compensations.

The upper Iweka tanker accident and inferno was an avoidable tragedy if the government had done the needful. The government press statement saying that men of fire service were there on time but were prevented from doing their job was a provocative lie. The Governor’s visit on Thursday promising to assuage the losses of the victims was also medicine after death because no compensation can bring back the dead to life.

Going forward, we call on the Anambra State Government to stop further showmanship and get down to business in addressing so many challenges the residents are facing on daily basis in the state.

Anambra , particularly Onitsha, needs at least 10 fire stations with fully equipped state of the art vehicles (at least two for each station) and resources (men and material). The government should recruit at least 600 fire fighters with enhanced remuneration and conditions of service. Each fire station needs at least 10 to 15 fire fighters. The state fire service should be excised from the Ministry of Public Utilities and placed on special executive list preferably in the office of the Secretary to the State Government.

Accessibility is a great challenge in Onitsha presently because of bad roads. The government should therefore commence aggressive road maintenance and enforce human face decongestion of roads from street trading.

It is shameful that the state fire service buys water from commercial boreholes in Anambra in cases of emergency. Government should review its activities and find a lasting solution to public water supply in the state. The Greater Onitsha Water scheme and Water Corporation with its equipments lying in ruins with some already vandalized should be addressed by the government.

We call on other states in the south east to rev up their own emergency response teams, equip their Fire Service team and also ensure that the Anambra situation doesn’t replicate in their states.