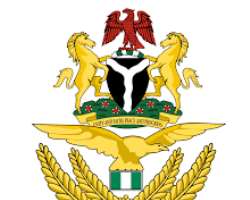 In continuation of its civil-military relations effort to win the hearts and minds of host communities in the ongoing counterinsurgency operations in the Northeast, the Nigerian Air Force (NAF) Wednesday flagged off a 3-day Medical Outreach in Gomari community of Maiduguri city.

The Medical Outreach which is an initiative of the Chief of the Air Staff (CAS), Air Marshal Sadique Abubakar to enable the people of Gomari community have access to free Medical services which would last up to Friday this week.

The free medical services to be provided during the Outreach, include insecticide-treated mosquito nets, visual acuity screening, eye glasses as well as Vitamin A supplements for children.

Others are de-worming for children, free medical consultations, laboratory screening and minor surgeries.

In his goodwill message at the flag-off ceremony, the Special Guest of Honour, the Executive Governor of Borno State, His Excellency Professor Babagana Zulum, represented by the Chairperson of the Borno State Emergency Management Agency, Hajiya Yabawa Kolo, thanked the NAF for the provision of such medical intervention for the host community.

She also noted that the assistance being rendered by the NAF, through the provision and operation of 2 Level 2 Hospitals in Dalori and Bama communities as well as feeding of over 1,000 school children daily, is a gesture worthy of commendation and emulation.

In his remarks, the Commander Air Task Force Operation Lafiya Dole, Air Commodore Precious Amadi, stated that the medical outreach was being conducted as part of the NAF’s Humanitarian initiatives aimed at improving the medical conditions of the people of Gomari.

He said that the gesture was in furtherance of the NAF’s corporate social responsibility geared towards meeting the welfare and emergency needs of its host communities through the provision of essential amenities and medical services in order to further improve civil-military relations.

The outreach and other NAF Humanitarian efforts in the Northeast, the Commander said, are part of NAF’s commitment to add value to the immediate communities as well as the society at large.

The choice of Gomari, he said, was partly informed by the fact that they have been good neighbours to the NAF.

He therefore implored the good people of the Community to avail themselves of the opportunity to get treated for their health challenges.

The people of the Community, who turned out in their large numbers, thanked the NAF for its continuous assistance and support to the community in the areas of welfare, health and provision of security, among other benefits.

A statement by Air Commodore Ibikunle Daramola, Director, NAF Public Relations and Information recalled that the NAF has been rendering such Humanitarian services to the people of Borno State through several medical outreaches as well as the two Level 2 Hospitals established in Dalori and Bama for IDPs since 2015 and 2016, respectively.