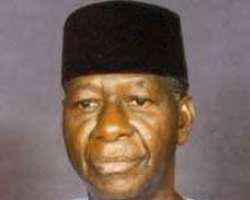 Former Chairman of the Board of Trustees, (BOT) of the Peoples Democratic Party (PDP), Chief Tony Anenih, has broken his silence over the zoning arrangement, which has been generating furore in the party.

Former president and incumbent Chairman of the party Board of Trustees, Chief Olusegun Obasanjo, had recently declared that zoning of political offices did not exist in the PDP as it was never concretized.

While not discountenancing that a purported zoning arrangement existed in the party, Chief Anenih, however, declared that it had been observed more in breach than in practice. To buttress his point that zoning in the party had never been sacrosanct, Anenih, in a letter dated June 14, 2010, and addressed to the Peoples Democratic Party National Working Committee, (NWC) recalled how in 1999 when the presidency was zoned to the South-west following the hue and cry from the zone because of the annulment of the June 12, 1993 election, the late Abubakar Rimi from the North-west collected presidential nomination form in violation of the purported zoning arrangement.

He also stated that in 2003, when the South was to have its constitutional second term, two aspirants from the North, namely the late Rimi and former National Chairman of the party, Chief Barnabas Gemade also collected nomination form and contested at the convention despite the purported zoning. Anenih observed that the situation was not different in 2007 when the party zoned the presidency to the North as 16 politicians from the south collected form in breach of the zoning arrangement, stressing that 'the fact that some aspirants stepped down for others was not a sign that the purported zoning was respected.

Saying that the present situation in the PDP required a re-examination, Anenih observed that Jonathan was on the same ticket with the late President Yar'Adua for eight years (four years of two terms).

According to him, 'one half of that ticket dropped as a result of President Yar'Adua's death. That half has now been restored, with the appointment of the Vice President, to allow Jonathan complete the remaining part of the tenure.'

He said Jonathan's candidature would be made possible if he performed creditably in providing good governance in the areas of electoral reforms, including arrangement of free and fair elections, power and energy, even development and peace in the Niger Delta region as well as social stability all over the country.

'The ball is absolutely in the court of President Jonathan and Vice President Sambo, a situation that presents a rare opportunity for both men to make history. If they are able to organise a free and fair election, ensure excellent performance in governance and do justice to all without discrimination, the sky will certainly be their limit.'

Anenih dismissed the logic that free and fair election, would not be guaranteed if President Jonathan, as being speculated contests the 2011 presidential election, as a sitting Nigerian president would use the power of incumbency to manipulate the process to his advantage.

'I believe that any President who is unpatriotic can support a candidate and still use his power of incumbency to rig, manipulate or ensure that his candidate wins the election. 'It is not only when the President is a candidate that the election can be rigged. A determined and courageous President who wants to write his name in gold can contest an election and in sincerity accept defeat, if the result is not in his favour.

'It is, therefore, not who the candidate is, but the issue of the political will and patriotic commitment of the President. That is why President Jonathan must make sure that future elections are free and fair, whether or not he is a candidate. God has always guided the President, and God will not abandon him and the nation at this crucial time,' Anenih noted.