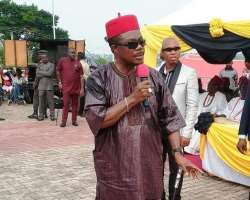 The people of Isu-Aniocha in Awka North Local Government Area of Anambra State have sued the State Government claiming N5 billion as general damages for allegedly trespassing on the community’s land.

The land was allegedly acquired by the State Government from usurpers of the rights of Isu Aniocha people for the developing of a housing estate in the area.

In the Suit No. A/243/2019 filed at the High Court of Anambra State sitting in Awka, the plaintiffs were also claiming N200 million special damages for alleged destruction of 2000 economic trees at the rate of N200,000 per tree, N30 million for 300 timber trees, N500,000 for medicinal shrubs, N10 million for agricultural crops and N4.75 billion for four shrines and three deities.

Messrs Geoffrey Udeh, Basil Ezeike, Jude Okoye and Anthony Nwogbo, who filed the suit on behalf of Umuneri Village in Isu Aniocha also urged the court to grant perpetual injunction restraining the defendants, their privies, agents and or cohorts from further trespassing on the said land.

Part of their 31-point affidavit reads: “In May, 2019, the Anambra State Housing Development Corporation and the other defendants engaged thugs, cultists, and some mercenaries and moved them into the plaintiffs’ said land to protect the bulldozers caterpillars, etc they put on the land and to ward off the plaintiffs from their land.

“The bulldozers, caterpillars, etc damaged the agricultural crops, economic crops, medicinal shrubs, timber trees, shrines and juju (deities). The massive damage done on the plaintiffs’ land by the defendants and their agent and cohorts was very massive thereby impoverished the plaintiffs beyond measure.

“The plaintiffs were prevented from further cultivating on the land, reaping from the economic trees on the land, making use of the medicinal shrubs and trees, worshipping and consulting shrines and juju on their land which have been giving signs of wrecking havoc on the plaintiffs and the defendants that desecrated them and other persons involved in the desecration directly and or remotely.”

According to them, a petition was written to the Anambra State Commissioner of Police through the plaintiffs’ counsel, complaining against the massive malicious damage, regretting that the CP failed to investigate the petition to date.

The plaintiffs said that after the malicious damage/trespass, the defendants engaged surveyors who conspired with them in plotting the land and installing beacons without the plaintiffs’ authority and installed sign posts with the inscription:- “This land belongs to Anambra State Housing Development Corporation …… keep off” all over the plaintiffs land, which are still standing on the land.

They added: “The Governor of Anambra State did not revoke the interest of the plaintiffs in the land and the land was not compulsorily acquired by the governor, or by other authority, including the defendants. The plaintiffs, on their part, did not consent to any acquisition or revocation and or trespass.

“The plaintiffs have been prevented by the defendants from making use of the land i.e, farming on same, reaping the economic trees thereon, burying the dead on the dead on the area designated as burial ground, consulting their shrines, deities, etc since May, 2019.

“The plaintiffs, who are predominantly farmers, have been suffering from undue hunger arising from massive damage to their agricultural crops, economic trees, etc and who have been prevented since May, 2019 from accessing their land for their agricultural activities. They are suffering colossal damage by reason of activities of the defendants on the land.”

They prayed the court to declare that the plaintiffs, as owners of the land, were entitled to the right of occupancy over the piece of land.

The statement read in part,: ‘’The Plaintiffs are native of Umuneri Village in Isu-Anaocha Town, Awka North Local Government Area of Anambra State, Particularly the 1st plaintiff, 2nd plaintiff, 3rd plaintiff are also the chairman, vice chairman, secretary respectively of Umuneri village meeting while the 4th plaintiff is one of the outstanding principal members thereof.

‘’The Plaintiffs have the authority and consent of the principal members of Umuneri Village Isu-Anaocha Town to file and prosecute this suit on their behalf.

‘’The 1st defendant is a body corporate with perpetual succession and a common seal meant to commercially purchase, lease or otherwise acquire, hold dispose of lane, etc.

‘’The defendants without jurisdiction jointly with one another decided and unconstitutionally and unlawfully trespassed into the Plaintiffs' land “Umuneri land” generically called and massively destroyed the economic, and agricultural crops, timber trees, medicinal shrubs, shrines, deities etc of the plaintiffs in May, 2019.

‘’All through this chain of continuous and unbroken genealogy dating from centuries past and times out of memory the said plaintiffs like their ancestors and predecessors have occupies, owned, possessed and cultivated the land in dispute, worship their shrine and buries their ancestors on the land; planted economic trees thereon and have been reaping the fruits ever since without any let or hindrance from any person until the plaintiffs out of sheet greed and wickedness and without any justification whatsoever started to lay a false claim to the land, claiming that the Governor has revoked the plaintiffs interest in the land which is fake and false…………..

‘’In the said plaintiff’s land, there are economic trees and timber trees like Iroko trees, Agba trees etc. There are other economic trees like mango trees, pea trees, banana and plantain trees, gravure trees, Ubuli trees, etc. Also there are medicinal shrubs. On the land are many shrines and deities worshiped by the Plaintiffs from time immemorial e.g. Ifijioku shrine, Ajana shrine, Anya deity etc.

‘’The land has been the only agricultural land from where the plaintiffs earn their living through agricultural practices, greater number of the plaintiffs being professional farmers. Their subsistence lies squarely on their farming activities on the land year in year out till date until to their greatest surprise some intruders (land grabbers) who call themselves Ezinano people from Awka trespassed on the land in 2005 and maliciously damaged the plaintiff’s crops and started potting the land and installing beacons thereon in conjunction with surveyors.

‘’The plaintiffs thereupon organized themselves and chased them away from their land and as a result the Ezinano people of Awka sued the entire Isu-Anaocha community in respect of the land. The particulars of the suit are as follows: Suit NO. A/51/2006 – Emeka Chinwuba and 2 ors (for themselves and on behalf of all other members of Ezinano Community, Awka Vs Chief Chukwuma Okoye and 5 ors (for themselves and the entire people of Isu-Anaocha Town, Awka North Local Government Area, Anambra State.) The Statement of claim of the plaintiffs, the Statement of Defence and Counter Claim of the Defendants and the Reply to the Statement of Defence and defence to the counter claim of the plaintiffs are hereby pleaded.

This suit had proceeded in court since 2006 till on 18/12/15 the plaintiffs’ suit – A/51/2006 was struck out by Hon. Justice C.A Emembolu thereby leaving the defendants’ counter claim still pending. Certified True Copy of the striking out proceedings is hereby pleaded.

‘’Notwithstanding the striking of their suit, Ezinano people of Awka represented by Emeka Chinwuba, Emmanuel Chukwuemeka Obi and Patrick Nkemka Okoye continued to interfere with the plaintiff’s said land by conspiring with Anambra Housing Development Corporation, Mr. Anthony Nwofor, Willie Okafor and Ministry of Housing and Urban Development and trespassed on the Plaintiff’s land in May, 2019 by massively destroying the Plaintiff’s crops, etc on the land and installing a sign post thereon which sign posts are still standing on the land’’.

‘’The defendant in suit No. A/51/2006 have applied for the High Court to hear their counter Claim which application has been fixed for hearing. A copy of the application is hereby pleaded.

‘’The Defendants on record after the aforesaid massive malicious damage/trespass engaged Surveyors who conspired with the defendants in plotting the plaintiffs land and installing beacons without the plaintiff’s authority and without and justification in law or facts.

‘’In addition to the above trespass the Defendants also installed sign posts with the inscription:- “This land belongs to Anambra State Housing Development Corporation …… keep off” all over the plaintiffs land still standing on the land. The plaintiffs caused photographs of the sign posts and the malicious damage to be taken and the massive are hereby pleaded.

‘’The plaintiffs by reason of the trespass and damage aforesaid engage a Lawyer, Chief M.P.S. Ngini Esq. of Mkpuorah, Mkpuorah & Co. to write to the Defendants which he did. The said letter dated 31/7/19 urging the defendants to remove the sign posts, stop further damage to the plaintiffs’ crops, tress, shrines, etc and to pay the sum of N500,000,000.00 (Five Hundred Million Naira) to the plaintiffs as damages for the massive damage is hereby pleaded.

‘’The defendants reacted to the above letter in a letter 19/8/2019 and denied liability to the trespass and malicious damage to the plaintiffs properties – crops, trees, shrines, etc. The letter dated 19/8/19 is hereby pleaded.

‘’In the defendants letter dated 19/8/2019 the defendants alleged that the plaintiffs’ interests in the said land was revoked by the Governor of Anambra State in 2014 notwithstanding the pendency of the suit and counter claim over the land for title to same, which counter claim is still pending.

‘’The plaintiffs have been prevented by the Defendants from making use of the land i.e farming on same, reaping the economic trees thereon, burying the dead on the dead on the area designated as burial ground, consulting their shrines, deities, etc since May, 2019.

‘’The plaintiffs who are farmers predominantly have been suffering from undue hunger arising from Massive damage to their agricultural crops, economic trees, etc and who have been prevented since May, 2019 from accessing their land for their agricultural activities have suffered, and are suffering colossal damage by reason of activities of the defendants on the land.

‘’ WHEREFORE the plaintiffs claims against the defendants jointly and severally are for:

‘’A declaration that the plaintiffs are owners in possession and entitled to the right of occupancy over the piece or parcel of land known and called generally as “Ana Umuneri”, Isu-Anaocha, Awka North Local Government Area abutting on Obibia River, the natural boundary between the plaintiffs and Okpuno and Enugu Agidi towns into which land the plaintiffs trespassed in May, 2019.

‘’The sum of 5 billion Naira being and general damages for trespass on the land by the defendants.

"GENERAL DAMAGES: The sum of N500,000.00 per day as general damages for continuing trespass and for loss of use of the aforesaid land. Perpetual injunction restraining the Defendants, their privies, agents and or cohorts from further trespassing on the plaintiffs’ aforesaid land from June, 2019."