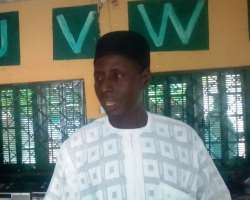 The School Based Management Committee (SBMC) has been promoting and enhancing learning in primary schools in Kano State as observed by our Bureau Chief who was in the state recently.

At Warure Special Primary School located at K/Aisami Sani Buhari Road, Gwale Local Government in Kano, the SBMC in this school provided computer room for the school and procured ten computers for the school so that the pupils would learn and become computer literate.

The Chairman of SBMC for the school, Mallam Abubakar Yaukabuga explained that SBMC and the Parents & Teachers Association (PTA) as well as the Mothers Association have been working together to ensuring that children, particularly the girls attend school, stay, learn and become educated.

He said “this computer room is the collective efforts of SBCM, PTA and Mothers Association in this school. Before, this school did not have a single computer. Now we have procured 10 computers for the school to start with and we will do more. With this, we are sure that our children would become computer literate”.

Speaking further, Abubakar said “The parents are cooperating with us because they have seen the impact of our efforts and they are impressed with our contributions to the school and the education of the children."

Abubakar said SBMC has gained the trust of the parents in Kano and that they are releasing their children to go to school. He said “SBMC has the influence to the extent that if a child does not come to school, we will look for the parent of that child and find out why the child was absent in school”.

He added that SBMC also facilitated provision of other facilities in the school to aid leaning and that the situation is similar in other schools across the state.

He commended the United Nations’ Children Fund (UNICEF) over the feat on the Girls Education Project Phase 3 (GEP3).

While speaking, the UNICEF GEP3 Project Coordinator in Kano, Mr Richard Sheyin Akanet said since May 2012, UNICEF has been implementing the 8-year GEP3 funded by the UK Department for International Development (DFID).

He said it was aimed at contributing to improved social and economic opportunity for girls in northern Nigeria.

Akanet said the major focus of GEP3 is to get school-age girls to schools without neglecting boys. He added that the GEP3 is being implemented in Bauchi, Katsina, Niger, Sokoto, Zamfara and Kano states.

Speaking on the outcome of GEP3, Akanet said more girls in target states in northern Nigeria have complete basic education and acquire skills for life and livelihoods.

He said this has has impacted their lives positively particularly in terms of improved social and economic opportunity for the girls.