Romantic Ploys and Skirmishes in the Presidency 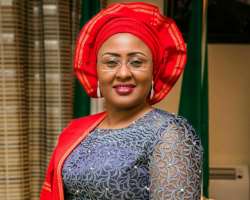 Aisha Buhari Nigeria’s First Lady is back. But there can be no question about it. The roll-out this past Thursday of the ‘fake news’ campaign that Nigeria’s President Muhammadu Buhari was about to take a second wife was professionally accomplished. Whoever was behind the ‘disinformation campaign,’ either (a) lives and works in the Presidential Villa, or (b) has deeply embedded sources that live and work in the Presidency.

Nothing sells like scandal. This particular ‘fake news’ had scandal written all over it. Not surprisingly it spread quickly like wildfire. Idle, escapist Nigerians who had just watched the season finale of the scandalous Big Brother Nigeria, had nothing in the immediate horizon to occupy their bored attention. So, they quickly latched on to the next available big thing - President Buhari’s ‘new wife.’

Pictures of President Buhari and Minister Sadiya Farouq, smiling or laughing, sitting side by side or standing shoulder to shoulder, were circulated in the social media. The putative invitation card for the wedding scheduled for the following day Friday October 11, 2019 was circulated as well.

In tow was an expose which detailed how the Cabal ring-fencing the President finally settled on Sadiya Umar Farouq as the chosen one. It was reported in the social media that the cabal considered Aisha a Fulani from Adamawa State, a predominantly northern minority state as untrustworthy compared to Sadiya, a Fulani from the predominantly Hausa-Fulani Zamfara State.

The separatist Independent Peoples of Biafra (IPOB’s) propaganda machine went on full gear. IPOB’s leader Nnamdi Kanu had long held that the current occupant of the Presidential Villa is not the original President Muhammadu Buhari who all Nigerians once knew. IPOB insist that the original President Buhari died a year or two ago, and was replaced with a Sudanese look-alike imposter named Jibril, by the Cabal.

IPOB’s propaganda machine latched onto the new-bride ‘fake-news’ with full vigor and zeal. IPOB propagandists reveled in the revelations as vindication of their long-held stance that President Buhari is not President Buhari but Jibril masquerading as President Buhari. According to IPOB’s logic, Aisha Buhari had long resisted the imposter Jibril’s sexual advances. Not being able to withstand his persistent onslaughts any longer, she had escaped on voluntary exile to London.

For IPOB, the Cabal who had foisted Jibril on Nigerians had to find a new wife for Jibril who could no longer withstand the sexual starvation associated with his new role. What was happening regarding President ‘Muhammadu/Jibril’ Buhari’s proposed nuptials was therefore for IPOB a defining ‘I told you so’ moment.

From last Thursday up till Friday, everything seemed to be moving at dizzying speed, except that news of the proposed presidential marital developments were not carried by the conventional print and media outlets in Nigeria. This by itself was not conclusive since Nigeria’s press appear to have been intimidated into self-censorship.

The Presidency itself was mum about the issue. The only denial of note came from an unheard of, fringe online medium, late on Thursday. Not surprisingly, Nigerian Muslims trooped out in their hundreds to the Abuja Central Mosque on Friday to witness at first-hand President Buhari’s much-touted wedding.

Except that nothing of such ever happened. There was no wedding whatsoever last Friday. The proposed bride, Minister Sadia Farouq was far away in New York representing Nigeria at a function in the United Nations. The arm-chair pundits who reacted or commented on the nuptial fake news were left with eggs on their faces. The Presidency did issue an official statement on Friday debunking the rumors as “fake news” concocted by enemies. Sadia herself from New York released a tweet/statement debunking the rumors, while expressing her unalloyed loyalty to the first couple jointly and singly.

The marital ploys and skirmishes in the presidency, however apparently hastened Aisha Buhari’s return from London to retake possession of the ‘other room.’ An apparently panicked Aisha left London Saturday, the following day after the wedding that never held, to return home after almost three months away.

On her arrival at Abuja, Aisha advised Nigerians to desist from ‘rumor-mongering.’ It is equally noteworthy that other than dismissing the nuptial rumors as fake news, the Presidency has been relatively unconcerned with establishing the original source, the ground-zero if you will, of the apparently malicious ‘nuptial fake-news.’

The over-zealous Nigerian Police Force has not threatened to track down the source of the rumors. Neither has the Directorate of State Security DSS. Everybody seems to be taking the high-ground approach. It is early days yet, but we wait to see if the ‘ground-zero’ source of the rumors will ever be unmasked.

Regardless of whether the Presidency decides to adopt the high-ground or not, the sophistication of this particular ‘fake-news,’ roll-out deserves closer scrutiny. Was it really a fake news instigated by embedded presidential enemies? (Why is the Presidency not interested in unmasking and booting-out these enemies?). Or was it a case of a prematurely leaked nuptial plan, aborted mid-stream? (The physical absence of Sadia from the country would suggest otherwise).

Was it a carefully choreographed disinformation campaign orchestrated by the Cabal? This latter point is not as outlandish as it would initially seem. Before we dismiss it as far-fetched, let us look at the winners and losers of this fake-news campaign.

The most obvious winner of the fake nuptial news is President Muhammadu Buhari. He emerges from the whole episode with his stamina intact, his cold during the Budget presentation at the National Assembly this week notwithstanding.

Only a man who can still ‘kick-it’ in the other room would contemplate taking a new wife. What is more, his wife Aisha, whatever her reason maybe for staying away for so long abroad, has been forced to scamper back to the other room, ‘with her tails firmly between her legs.’ I would say that nothing works better than a little romantic ploy with hint of alternative options, to whip an errant wife back into line.

Another winner of this fake news episode is the Cabal. Whether or not they were the instigators in the very first place, the Cabal wins because the reports suggested they had found a suitable replacement for Aisha who they famously once labeled as the ‘suicide-bomber.’ The perception that they are always looking out for the President’s interests, even extending into the ‘other room’ makes them winners and solidifies their standing with the president. If they were the ground-zero of this whole fake news enterprise, their standing is further solidified by the fact that they forced Aisha back home into the President’s other room.

The third winner of this whole fake news cycle is Minister Sadia Umar Farouk. Those who did not know of her before, now know of her. If she was an innocent subject of a malicious fake news campaign, she now stands to be compensated by the President and the Cabal for the pains she has gone through. What is more, if there was no attraction between her and the President before now, future encounters between the two of them would forever become awkward. Talking of awkwardness, who knows what tomorrow would bring between two persons of opposite sex? The same considerations still stand even if she was the ground-zero of the rumors except if she is publicly unmasked as the one.

On the flip side, except it is proven that there was really something going on between the President and Sadia, IPOB is one of the major losers of the whole affair. IPOB’s credibility would seem to have taken a major hit particularly with the hasty return of Aisha to reclaim the ‘other room.’

The other major loser of the whole episode is Aisha herself. Whatever may be her motivation for abandoning the other room for so long, she has been forced back home by intervening circumstances to reclaim her position. Except that now, everybody now knows that Mr. President has ‘other options.’ Her influence is diminished to the extent that the Cabal and Sadia’s influence is increased.

If the ‘nuptial scam’ was the work of an unknown deeply embedded third party ‘X’ in the Presidency, eager to discredit the President, then they are the final major losers of the whole episode. Even if the original intention was there, which is increasingly doubtful, the mere fact that nothing of such happened on the appointed nuptial day, means that their campaign failed, or that the Presidency was able to call off their plans without incurring damages.

The fake presidential nuptial event may have come and gone without substantiation. Could it be that the Cabal with one ingenious stroke of disinformation, a ‘double-whammy,’ forced Aisha back home while at the same time eroded IPOB’s public credibility?

Time will tell. What is clear is that in the apparent battle of wits between Aisha and the Cabal, if anything like that does exist of course, the running scores now stand at Aisha 1 – Cabal 2.