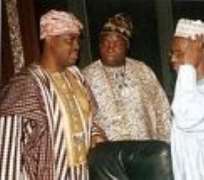 I usually do not respond to articles, especially of Ike Ugwu's sort, because I think that a lot of what is written about certain individuals in Nigeria is gibberish, and I do not intend to be bundled into that bandwagon. The propensity to eat up our heroes is the bathos of our times, and it appears that is what Ike, perhaps inadvertently, is promoting by his rather visceral article and his conclusions on Mr. Nasir El Rufai.

Let me premise this by confessing that, unlike Fani Kayode, I have little admiration for Olusegun Obasanjo even as I think he worked with many brilliants minds in Nigeria. OBJ capped a plethora of governance errors with inordinate ambition, which ruined his presidency. I would however not take away from OBJ his penchant for surrounding himself with reform-minded individuals. We can debate that some of these talented Nigerians experienced apostasy along the way, lost their minds and remade themselves in the image of Baba himself. It may be argued that at some point, some of OBJ's allies (Kayode included) sounded in the media as though the agenda was more to promote OBJ the person in a laudatory fashion rather than the programmes of the administration. We saw a loyalty to Baba when we needed a loyalty to ideology. OBJ did not equate the administration; indeed, he derailed from many lofty programmes designed by some of Nigeria's best brains. However, consider Okonjo Iweala, El Rufai, Fani Kayode, Obiageli Ezekwesili, Nuhu Ribadu, Dora Akunyili, Charles Soludo, Oluyemi Adeniyi, and others in one administration as opposed to the group, many of who are alarmingly incompetent, assembled by Yar Adua.

The OBJ reformists were appointed based on competence (not politics), and they provided more purposeful stewardship than the politicians nominated by the different states. We witnessed the transformation of Abuja; we saw dynamism in our foreign affairs; we saw how Iweala rescued Nigeria from the debt burden; we witnessed a frontal assault on corruption; and we saw a Minister of Aviation who actually fought for Nigerians. All these must be instructive.

Kayode has revealed the intense succession battle in the twilight of the OBJ administration between what he referred to as the intellectuals and the politicians. It was indeed a battle between the reformists and the conservatives; those who thought Nigeria must change and those who felt things had to remain as they were. Not unexpected, as Fani revealed, OBJ succumbed to the will of the hardcore politicians and chose Yar Adua exactly as he did in 1979 when he handed power to an incompetent Shehu Shagari.

Kayode and co can be thankful to OBJ for inviting them to public service, but they ought to condemn the manner in which he torpedoed a glorious moment to set Nigeria on the path to irreversible greatness. OBJ needed to have pushed for an El Rufai presidency, and Nigeria might never have been the same again. No, he preferred Yar Adua only as a tactic to liquidate Atiku Abubakar politically. I find it curious that Kayode, Rufai, Ribadu and others expected Yar Adua to kiss them on both cheeks. As history has shown, OBJ's reformists did not only lose out politically, they almost nearly lost their lives.

I think the EFCC case against Rufai is nonsense. There is no argument it is a Yar Adua machination. It is inconceivable that the apostle of corruption, James Ibori, became the de facto Vice President in the Yar Adua's government while people like Ribadu, Rufai and others were chased out of their motherland.

The reality about the Nigerian situation, sadly, is that public perception of individuals in government is not always shaped by the amount of good they do. Like in all less sophisticated societies, people are excited by sensation and influenced by propaganda. Stories of gung-ho, Gestapo tactics, and of buying choice properties in Dubai have been woven around Ribadu. Rufai is said to have allocated plots of land to his friends and family. Kayode is said to be corrupt. Nigerians love these stories, more to demonstrate frustrations with the status quo.

For demolishing houses belonging to some of the most influential Nigerians in order to save the Abuja master-plan, it would be foolish not to expect a ferocious fight-back by the lawless moneybags. I think that Rufai gave meaning to governance, and to the expression of the law not being a respecter of status. He demonstrated that if there is a will things can work in Nigeria. He showed it is possible for public servants to plan properly and implement efficiently, and for the Nigerian people to get rewards for the natural resources they own and the taxes they pay. He might have made mistakes, but who doesn't?

I commend Rufai's participation in the blogosphere - the social networking communities - especially Facebook. Obama uses it to great effect. I follow Tony Blair, John McCain and others on twitter. Rufai's blogs provide robust and unadulterated insights into the inner workings of his mind. The more I read them the more I see him as a highly detribalized Nigerian. Often, Rufai canvasses that Nigeria needs rulers based on not a so-called ill-conceived zoning arrangement but on competence. He is asking Nigerians of different tribes, religions and geographical regions to forge friendships and consider how they can contribute to Nigeria. Rufai desires a Nigeria of our dreams, where equality, peace and justice will reign. People like Rufai give me hope that Nigeria will rise, that anytime from now, brothers from minority states such as Edo State (where I come from and have been told we could never rise to rule Nigeria) from the North, East, West, and South will unite under one indivisible Nigeria, with a common purpose and a common destiny. In other societies, those who have helped advance society's cause are the true heroes, not the moneybags and the thieving politicians who continue to prey on the society using the instrument of ill-gotten power and wealth.

What we need do as Nigerians is not to let this opportunity slip. The first step is to protect and promote our heroes – and they are very few. We should encourage the Rufais, Kayodes, Nuhus, Iwealas, Dukes, Utomis to commit more to our beloved country. “The labour of our hero's past must never be in vain…” so goes a line in our anthem. The next elections are a litmus test.

A REJIONDER....TO THE ARTICLE WRTTEN BY IKE IKEGWU...IS EL-RUFAI FIGHTING FOR POLITICAL RELEVANCE.