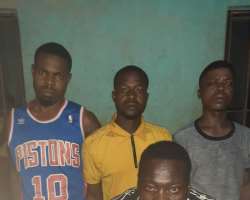 Four members of dreaded Eiye cult group who have been on the wanted list of Lagos State Police Command have been arrested.

The suspects who were on police wanted list for their involvement in various deadly attacks that have claimed lives of many innocent people were apprehended by men of Ogun State Police Command.

The suspects include Owolabi Rasaq, a 28-year-old man who resides at Igunnu, Bariga Lagos and Chidi Michael popularly known as Chiboy, 26-year-old residing at Adelepo in ikorodu Lagos.

The PPRO said "the cultists were having a nocturnal meeting in a hideout somewhere in Ogijo on how to carry out another attack in Ogun state."

"Upon the report, the DPO and his men swung into action and stormed the hideout where the four suspects were arrested."

"Investigation revealed that the arrested suspects have been on wanted list of Lagos state police command for series of deadly attacks leading to death of many innocent members of the public."

"They have all made confessional statements of being members of eiye cult group as well as their involvement in various cult related clashes in Lagos and Ogun state", the PPRO said.

The Commissioner of Police in Ogun state, CP Bashir makama ordered the immediate transfer of the suspects to State Criminal Investigation and Intelligence Department for discreet investigation and prosecution.