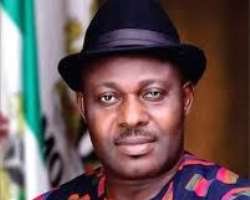 A Security Summit, aimed at reviewing the security architecture of the two oil producing Local Government Areas of Ohaji/Egbema and Oguta of Imo State is underway.

Deputy Governor of Imo State, Engr. Gerald Irona disclosed this while receiving a delegation of the Old Boys Association of Priscilla Memorial Grammar School, Oguta who paid him a courtesy visit at his Oguta residence, weekend.

According to him, the Summit, scheduled to hold in the last week of October, 2019 is targeted at ensuring that the area is crime-free.

“Before the end of the month of October, we will have a Security Summit in Ohaji/Egbema/Oguta Local Government Areas of the state. We have tried to clean up Oguta axis, but considering the peculiarities of the two Local Government Areas, there is need for critical stakeholders to sit down to discuss issues around security in the area. At a time in this community, citizens were living in fear. Communities in some of the areas were overrun by hoodlums. People could not walk freely without being molested. Within the few months that we have stayed in office, you can see that we have brought some level of sanity in the area. We are not there yet. This has to be sustained and all stakeholders need to be involved. Our people returning home must have a safe Christmas celebration. Thank God for our Governor, Rt. Hon. Emeka Ihedioha.”

Continuing, the Deputy Governor used the occasion to urge the old boys to be patriotic, while promising to continue to support their activities and by extension development of the School.

He described the birth of the new administration in the state as divine, assuring him of their continued support.

“Your Excellency, I wish to state that the election of the Governor, His Excellency, Rt. Hon. Emeka Ihedioha and your humble self, came at a time Imolites were re-echoing the biblical saying, “come over to Macedonia and help us.” Indeed, your election was a divine mandate; hence, we have heaved a sigh of relief. We now have sanity in governance, unlike in the recent past, when governance was bastardized. This government’s record of achievements during the first 100 days in office is remarkable. Over and above all, due process is now the order of the day.”

In another development, the Deputy Governor on Saturday, met with political office holders in the two local government areas of Ohaji/Egbema/Oguta, where issues concerning the security of lives and property of citizens of the area topped the agenda.

Highlight of the meeting was the setting up of an organizing Committee for the Security Summit, with ISOPADEC Chairman, Magnus Obido and Dr. Walter Duru as Chairman and Secretary, respectively.