Kogi Guber 2019: A Race Between The White Lion And The White Cock? 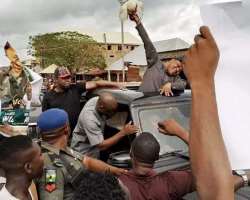 Animals appear to be the most unfortunate set of beings in this world. Millions and millions of animals of various species are slaughtered everyday for one reason or the other. While some are killed to serve as meat for human consumption, many others are slaughtered to appease the gods and for other related purposes. Biblically, God gave man charge and dominion over all creatures and also gave man the right to have them as food subject to certain restrictions in the old Testaments.

It is therefore, not a thing of surprise that animals serve as meat for man, although in rare occasions involving wild animals, man also serves as food for animals! Well, enough of this analysis of animals' sad fate in human hands! In this article, we are very much concerned with the recent episode of Wada and the white Cock drama even as we prepare for the November, 16 Governoship election in Kogi State. And there we go: Sometimes last week, news carried it with pictorial evidence that the PDP Governorship Aspirant in the forthcoming gubernatorial election in Kogi State, Engr. Musa Wada, was flagging into the air a white Cock during one of his tours in Igalamela/Odolu L.G.A. of Kogi State.

In his famous book entitled "Animal Farm", George Orwell exposed the "politics" that play out in the animal kingdom. Although, the book is a political satire which is reflective of what is obtainable in human societies using animals as characters, there is no doubt that animals indeed, play politics in their own way and style. But, what is not clear to yours sincerely is whether it is part of animal politics for a Cock of whatever colour or description to be lifted up and raised shoulder high by a human aspirant as if the Cock itself is the flagbear of a political party! Animals could be involved in certain political or national events as a matter of symbolism. For instance, during independence anniversary celebrations, a Governor or the President may let white doves or birds out of a cage to symobolize the freedom of the people or nation from colonial rule. We have seen that times without number. However, what we have not commonly seen in Nigeria's political events is the display of a somewhat ritualistic cock by a Governorship Aspirant in a broad day light while on "campaign" tour with his convoy! As comical as the event appeared, serious issues lie therein. We were made to understand that this obvious display of fetishness was meant to scare the Government in Power and their supporters in order to let them know that the forthcoming election will not be business as usual. Others had it that the white Cock was a gift given to the Aspirant by his supporters in Igalamela/Odolu Local Government as a symbol of peaceful coexistence, victory, progress and development that would be ushered in the State if the PDP candidate eventually wins the November 16 gubernatorial election. With all due respect, none of these purported reasons in my humble view, is cogent enough to justify the uncivilized gesture of parading a Cock by a Governorship Aspirant to the cheering of his supporters. Others in Engr. Wada's convoy could have done that if it was necessary but certainly such shouldn't have come from an Aspirant like him from whom much is expected as the major contender with the incumbent Governor. Assuming Engr. Wada is contesting under the platform of APGA, one would have taken it that perhaps, he was promoting the Party's logo which is that of crowing cock. But, this is not the case here.

It is very mind boggling reviewing the roles animals play in Kogi politics in recent times. Whereas the incumbent Governor of Kogi State is also called the "White Lion", his major competitor in the forthcoming election - Engr. Musa Wada has obviously pitched his tent with the "White Cock". One thing is common to these two major contenders, and that is, the uniformity of the colour of their respective choice animals. That uniform colour is White! But then, while the incumbent Governor will be proud to be called the "White Lion", I honestly doubt if the PDP governorship aspirant would ever like to be called the "White Cock"! Be that as it may, the undeniable fact is that animals now take active part in Kogi State politics. When animals are literally coopted into the nuances of human politics (ritually or otherwise), no one need be told that "our husband has gone mad again"! Yours sincerely will not be shocked if we wake up one day to hear the bizarre news that the animal kingdom has reached a consensus to present a candidate to purchase an Expression of Interest Form from the INEC office! After all, this is Nigeria!

But, as it stands now, the race for Kogi Governoship position appears to be between only the White Lion (GYB of the APC) and the White Cock (EMW of the PDP). By strength or might, the Lion is expected to prevail over the Cock but learning lessons from the biblical story of David and Goliath, I will just conclude this piece by saying that the race is not over until it is over!