Right of reply: Madumere and Okorocha’s family of perdition 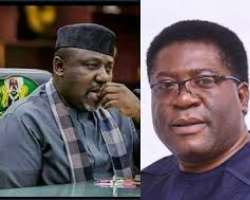 It is unfathomably incredible to note that since the former Governor of Imo State, Chief Ethelbert Okorocha, ingloriously exited office, he has not ceased to express his pains following the eternal political defeat he suffered in the last elections.

For a man who had concluded in his heart that there is no God, he would see men as mere chaffs if not mere dust that can always be trampled upon. What happened! How can Madumere he denied every rights fought in concert with other patriotic Imolites to deny him of APC guber ticket and, worse still, defeated him at March, 2019 governorship election.

I have chosen to talk less about Chief Uche Nwosu because he has never been in the picture and have maintained this principle. There is no doubt that there is no Nwosu without the clowning avaricious man of the century.

Attacks on the person of His Excellency, Prince Eze Madumere, from Okorocha’s children of perdition has continued unabated, timelessly and relentlessly. What is preposterous about these concoction of lies is that they are usually full of scattered thoughts even as they flow illogically.

The latest of such attacks resurfaced yesterday. It was from no other person than the most sycophantic aide who writes as though he is propelled by an evil spirit. Otherwise, one wonders Jones Onwuasanya’s locus. He absolutely has no locus standito speak on issue concerning the internal workings of All Progressives Congress. To the best of my knowledge, Onwuasonya was appointed by Okorocha’s son-in-law as his campaign media director and as the spokesperson for Action Alliance after the approval of Mr. Okorocha.

Sounding mischievous about Madumere’s decision to congratulate Governor Emeka Ihedioha after his victory at the governorship polls was the hallmark of incivility.

It smacks of leadership irresponsibility to put one’s selfish desires first before that of the people. We have it on good authority that Okorocha never wanted the inauguration and swearing-in ceremony to hold so as to continue to oppress and traduce the people of the state.

Madumere understanding the risk level of the land mines and its dire consequences on the people of the state quickly filled the gap. For Okorocha’s ignorant handlers, they never knew what their boss had done. The question is, who would have benefited from Okorocha’s plot to stop the Swearing-in ceremony of Rt. Hon. Ihedioha? Could it have benefited Senator Hope Uzodinma who came distant 4th or Senator Ararume of All Progressives Grand Alliance (APGA) or Okorocha’s son-in-law who was of Action Alliance?

I believe that with this little tutorial on political maneuvering, it was not in doubt that Okorocha only wanted to cause a constitutional blockade against the people of the state. At this point, only wisdom will suffice. It would have only taken few persons like Madumere to also decode such terrorist ambush and of course, he was able to diffuse it.

For Onwuasoanya’s information, Okorocha sent some clerics as emissaries to the former Deputy Governor, Prince Eze Madumere, seeking a truce laced with satanic plea that he should not put in appearance at the swearing-in ceremony, which held at Dan Anyiam Stadium.

To Okorocha’s greatest dismay and disappointment, Madumere rejected both the truce and offer of death.

As a leader who has the interest of the people at heart, he went to the stadium and performed the constitutional role of formally handing over the baton of leadership to the present Ihedioha led administration. Immediately he performed the expected role, he left the stadium though not without a thunderous ovation. That is the spirit of a selfless leader.

As it were immediately elections are over, it is expected that governance should take effect. It is also the inalienable rights of any candidates to approach election tribunal if he feels short-changed in whatever guise for redress.

As the election tribunal was ongoing, everybody presented his case in court. After the tribunal had sat and weighed all the allegations, counter allegations with the evidences at her disposal, it gave its verdicts. In that outing, Rt. Hon. Ihedioha was reaffirmed the winner of 2019 Imo governorship election.

In the world democracies, it is a tradition to congratulate an opposing candidates and party that won the election. Such principle is derived from the principle of leadership that seeks to mobilise people to greatness.

If Madumere as a democrat with real liberal democratic orientation chose to congratulate an opposing party, what is wrong there. Without sounding insulting, those behind Onwuasonya’s juvenile outing can only pass for medieval autocrats. In fairness, any leader who means well will never sacrifice the ‘General Will’ for egocentric ambition.

On September 11, 2019, all media platforms were awash with various headlines over the Governor of Rivers State, Chief Nyesom Wike’s congratulatory message to President Mohammadu Buhari. That outrage in the ‘Peoples Democratic party’ (PDP) was uncalled for. Governor Wike’s lesson was historic and encouraging. It was done in the spirit of sportsmanship.

If Madumere were to have been a pawn on Ihedioha’s chase board, then what is Okorocha’s position in the games theory. Surely, he lost for good. He lost for misrule. He lost due to alleged large scale pillaging of the common wealth of the state. He lost for obvious derailment of government to a mere family slave plantation, where they see themselves as Masters and Imolites as serfs.

Is it not shameful that Okorocha and his men are in the news for notoriety sake and for carefully superintending crimes against humanity and nature. Today, Imo is desolate with features of devastation all over. No one street where Okorocha claimed to have ploughed in billions of Imo money is standing or has a 50-meter stretch without a gully. For anyone looking for an example of example of ecological devastation, Imo should readily serve the purpose.

Prince Madumere remains a leader in All Progressives Congress where he is a founding member. While Oga Okorocha tried to destroy the party, he remained resolute and swam all the way throughout the period of election. He has done more for the party than a man who left the party without an office for 8 good years as the Governor of a state. It took an extra ordinary stakeholders party meeting to raise fund for the executive members of the party. A shameful showing for a selfish politician.

It is a truism that Okorocha and his children of perdition know not what they represent. Their existence that the prophesy may be fulfilled. I say so because only those who are doomed would still have the temerity without shame to continue to make a noise in an environment they made themselves enemies.

If Okorocha, his family members and other cronies who are facing trials are not ashamed of their trailing filthy toga of anything evil as they seek for space in every little corner, it is not out of place to say that these ones are children of perdition. Like Jesus Christ knew the time and pulse of the moment, Judas still betrayed Him that the prophesy may be fulfilled.

Surely, Madumere has peace and is a free man without anyone casting stone of curses at him. He has played his role to redeem Imo from the jaw of destructive human pests.

What they consider success might be stolen wealth, shooting your way to the senate and appropriating suffering senior citizens’ pensions but none of these can be equated with peace of mind and freedom that come with good name.

As for the libelous suit against Onwuasoanya, it is only leaders who are law abiding that approach court to seek redress. We do not believe in their chariots and raw strength of hooligans and marauders but we believe in the extant laws of the land. Do not believe I will go beyond this because people like us do not take contempt of the court for granted.