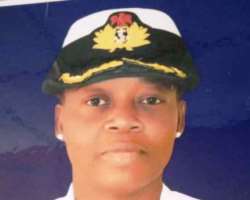 Bernard Simon, the suspected killer of a female Naval Commander, Oluwayemisi Ogundana in Jaji near Kaduna State, told journalists on Wednesday that he killed Ogundana “because she was cheating us in the school” and because she “denied me in particular of over N100,000”.

Following the killing of the Naval Officer, who was also the Commandant of the Command Secondary School of the Armed Forces Command and Staff College, Jaji, in September, the prime suspect, Bernard Simon was arrested and paraded on Wednesday along with 49 other suspected criminals by the Kaduna State Police Command.

Simon, 36, who confessed to the crime. He said he killed the Commander alone after sneaking into her house located at the Jaji Military Cantonment in September.

The Commissioner of Police, Ali Janga, while parading the prime suspect said he (Simon) raped the Naval Officer to death, a claim which the suspect denied.

He said he killed the female military officer because she was allegedly fond of cheating the staff under her.

Narrating how he carried out the killing, Simon said he used an iron rod to hit her head from behind, after sneaking into her house.

He added that after dismembering her body, he packed them into two bags, dropped them in the officer’s SUV jeep and drove off to where he dumped the two bags into a shallow well.

Simon said, “I killed Commander Ogundana alone. I sneaked into her house in the evening and hit her on the head with an iron rod. I killed her because she was cheating us in the school. I’m a teacher in the school and she was cheating us as staff under her. I killed her to set the whole staff of the school free from her cheating. There are some financial benefit she deprived us of. She denied me in particular of over N100,000. That is why I killed her to set myself and other staff free from her.”

Meanwhile, the State Command also paraded 50 suspected kidnappers, armed robbers and other criminal elements, said to be terrorising the state.

According to the State Commissioner of Police, dangerous weapons were recovered from the criminals.

He also said among those arrested were the abductors of the Ahmadu Bello University female students and the member of the State House of Assembly.

He noted that the command has sustained its fight against cattle rustling in the state.