NIGERIA, US, AND THE OIL SPILLS 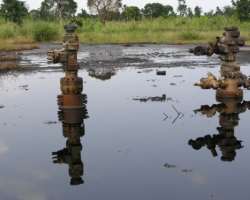 
He squeezed all he could out of it; he sat, for the first time, behind his desk in the Oval office in the White House to do it.ã€€ And he had come across as a leader, father of the nation that time. It was the U.S. president, Barrack Obama, who recently addressed his fellow citizens over the oil spills on the U.S. coasts. On that occasion, Obama told his people a few things they might not have known already, and Nigerians who heard him, what they already knew should happen, but is yet to happen in their own county.

This is "the worst environmental disaster America has ever faced," the president said of what happened in the April 20 explosion and fire on a Gulf of Mexico oil rig that led to millions of gallons of oil leaking into the ocean. He added that the mess was a persistent epidemic, not a one-time natural disaster. White House officials too had not been silent; One said Obama's goal is to "restore the Gulf, not just the way it was the day the rig exploded, but years ago." Those were appropriate words at a time of national disaster.ã€€

Then the way out of the crisis began to be listed, and the president took the lead once again. He called on his citizens to exercise patience as his administration deals with the Gulf of Mexico mess.ã€€ Then he seized the opportunity to push for a focal shift – for his nation to move away from its reliance on the use of fossil fuels to cleaner sources of energy. After a meeting with the chairman of British Petroleum (BP), Carl-Henric Svanberg, owners ofã€€the broken oil well in the Gulf, the president directed that the multinational company should pay all clean-up costs and damages from the massive leak. He said the company should "set aside whatever resources are required to compensate the workers and business owners who have been harmed as a result of his company's recklessness." And "this fund will not be controlled by BP," he added. ã€€It was "in order to ensure that all legitimate claims are paid out in a fair and timely manner, the account must and will be administered by an independent, third party."

BP, in turn, has not been saying all the right things under such circumstances. Its Chairman had been apologetic to Americans. After agreeing to a $20 billion fund to compensate victims of the disastrous oil spills BP’s CEO, Tony Hayward, said he was "personally devastated"; that the explosion and sinking of the BP-operated rig "never should have happened" and that he was "deeply sorry that they did." Now that apology is for 60,000 barrels of oil that flow into the Gulf every day.ã€€ Massive lot, but the effort to stop the leak is no less. First, Obama had placed a moratorium on deep-water drilling in the entire region. He had also poured in enormous resources. There are someã€€ 30,000 persons currently working in four U.S states that are already affected. Their job is to stop leakages and clean up. There are also "thousands of ships and other vessels," working in the area, according to the president. And he had also authorized deployment of more than 17,000 National Guard members along the coast to be used as needed by state governors.

The basic outline of this is clear: There was a disaster resulting from the operations of a multinational company. The consequences galvanized the nation’s leadership into action. The culprits were called in by the U.S. government to account and pay for their actions or inactions. In this, the leadership has shown that it is their territory, their resources, and no multinational can wreck havoc, however accidental it is, and walk away. This is a scenario Nigerians have never fully witnessed in more that fifty years of oil exploration in their country. The Niger-Delta is a disaster due to oil exploration. This is a place where companies would hardly tell about their own pollution, and there is little or no effective monitoring of spills. The government claims there were over 7,000 spills between 1970 and year 2000. But concerned groups see it differently. Spills in the Niger Delta is more regular than even what the government is aware of; there is an average rate of 300 spills of any size every year, they say.

The nation’s leadership had, in spite of this, either collaborated with the multinational companies or used instruments of state to execute indigenes who agitated for their environment the same way environmentalists do in the current situation in the U.S. And the pattern is deeper: it runs across every area of operation of multinationals in this country – from drugs, civil constriction, to telecommunications. Foreign-owned companies here do, and get away with, what they would not in some other lands. The leadership here, the cream of which had been accused of collecting bribes, selling the people out to foreigners in uncountable number of cases, is to blame.

It is a good thing that the current administration in Nigeria is making effort to pass a new bill to regulate the oil and gas industry. Provisions in it would give both the nation’s government and the oil communities a better say in the exploration and the uses of their resources. The government should see the bill through in spite of opposition from companies involved. It is a good starting point to turn around years of injustice to the natural owners of natural resources. For just as the U.S. president had shown who the owners of both the territory and the resources are, so it should be done on this side of the Atlantic.