Like Oranmiyan, I Will Reenergize Yoruba Race As Odole Oodua – Adebutu Promises 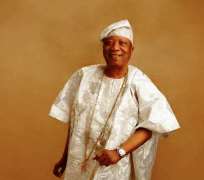 Across the business world, the name Sir Kesington Adebukunola Adebutu is not unknown especially in the gaming industry where he had set a leading pace several decades ago and still maintains an indispensable dominance greatly beneficial to the youths till date.

This business magnate of many parts who has different traditional and social titles to himself recently spoke on his selection as the ODOLE OODUA by the Arole Oodua himself, Ooni Adeyeye Enitan Ogunwusi Ojaja II, the Ooni of Ife during a media interactive session facilitated by the King's Director of Media & Public Affairs, Comrade Moses Olafare.

Just like Oranmiyan, the founder of the Benin and Oyo royal dynasties who had earlier pioneered the office of Odole during the reign of Oduduwa, Sir Adebutu whose philanthropic gesture knows no bound is virile, bold, adventurous, circumspect, dutiful and an uncommon believer in the unity and progress of the Yoruba race. Going by his antecedents and accomplishments in human development, capacity building and promotion of the Yoruba culture it is not an overstatement to call him a complete Yoruba elder.

During the media session, the frontline business mogul revealed his awareness of the responsibilities attached to the status of his new office of Odole Oodua, assuring the entire House of Oduduwa worldwide of his readiness and fitness to optimally discharge his duties especially working with the highly revered Ooni and the entire traditional institutions in Yorubaland in rallying the descendants of Oduduwa wherever they are in the world for the unity, peace and progress of the race as pioneered by the great Yoruba warrior and king Oranmiyan succeeded after many centuries by the former Asiwaju Omo Oodua and Premier of Western Region of Nigeria, Chief Obafemi Awolowo also succeeded by former Attorney General of the Western Region of Nigeria, Chief GOK Ajayi(SAN).

To set the record straight, Odole Oodua is a respected position once held by the late Chief Obafemi Awolowo and subsequently by late Chief G.O.K Ajayi. It is a highly revered chieftaincy in Yorubaland pioneered by the great Oranmiyan while he was a prince of Ife.

Adebututu who was flanked by the Chairman of the chieftaincy planning committee, Aare Kola Oyefeso and a Cultural Ambassador to Ooni of Ife, Ms Asabi Morounranti during the media interactive session explained as a natural peacemaker and promoter of the progress and cultural values of the Yoruba that he has always been, this new sacred responsibility will spur him to work more with the Yoruba kings for the benefit of the oldest tribe in the world.

“While it is a known fact that I am used to peacemaking especially to unite and develop the great Yoruba race, this chieftaincy will make me take it to the next level for the betterment of our race which is the oldest race in the world with its traditional headquarters at Ile-Ife. Without sounding arrogant, I humbly say that most of the Kabiyesis across Yoruba land are my friends and Am going to work smoothly with them. If you notice, they are always present at my events.

“Before I was announced as the recipient of this sacred chieftaincy, I have been taking steps to ensure that there is unity among our monarchs not knowing I was being watched.

“For your information, I am the Asoju Oba of Lagos and mind you, I am not a Lagosian. That is to explain to you that if there is no good rapport between me and Oba of Lagos I wouldn't be so honoured. Simply, these points and facts that I have good relationship with the Yoruba monarchs who are our fathers.

“For instance, when the issue of our son (Vice President Yemi Osinbajo) happened, I hurriedly called the Ooni, Alake, Akarigbo among others who all swung to action in their individual and collective capacities.”

Adebutu explained.
On what will be his political interest as the Odole Oodua, Sir Kesington added that he has no interest in partisan politics stressing that he is a father of all politicians regardless political differences

.
“I am not a politician but I am a father to all politicians regardless of their political parties and I will use the avenue to reenergize our race towards the path of prosperity.

“I am proud to be taking after Chief Obafemi Awolowo and Chief G.O.K Ajayi as the Odole Oodua because if you study these personalities, you will realize that they were leaders with difference. Look at the late Obafemi Awolowo, he led the most progressive politics in the south west and till today no politician has been able to achieve half of what he did.

“Similarly, Chief G.O.K Ajayi was a prominent great lawyer who lived a good life worthy of emulation especially by standing for the poor and vulnerable members of the our society. All these excellent records have challenged me to do more than my predecessors and I am ready to give my best.” He added.

Sir Kesington Adebukunola Adebutu will be installed as the Odole Oodua in a grand style on Saturday, October 19th, 2019, at the Ile Oodua palace of the Ooni of Ife in Ile-Ife which is the ancestral home of the Yorubas after traditional rites by Ife elders(Agba Ife) and the chief priests known as Oba Isoros.