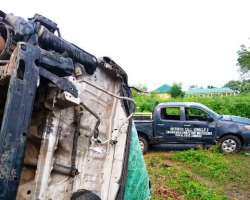 The Board of Inquiry (BOI) set up to investigate the killing of three police officers and two civilians in Taraba State in August has found that both the police and military were culpable for the incident.

The Defence Headquarters in a statement on Tuesday said the panel submitted its findings and linked the deadly confrontation to a breakdown in communication between the police team that went on an operation in Taraba State and the soldiers manning a checkpoint in the state.

Three officers from the police intelligence response unit were killed on August 6 while returning from an operation to arrest a suspected kidnap kingpin in Taraba. The team came under fire from a company of soldiers while transporting the suspect, Hamisu ‘Wadume’ Bala, in a police van to Jalingo, the state capital.

The suspect was freed by the soldiers afterwards. He was later arrested in Kano a few weeks later and has remained in police custody ever since.

Two civilians believed to be working with the police were also killed in the attack, which generated nationwide outrage.

The attack led to open recrimination between the police and the military, with the police insisting that the attack was premeditated by the soldiers in a bid to free the suspect.

Several media reports later said there were links between an army captain in the state, Tijani Balarabe, and the suspect. Police internal findings also showed that the suspect had a series of telephone conversations with senior police officers in Ibi, the community where Mr Bala was arrested.

The panel recommended additional investigation of Messrs Balarabe and Bala, four police officers and the divisional crime officer in Ibi, Taraba, to establish their involvement in the fatal incident before prosecution.

The panel was led by Ibikunle Olaiya, a rear admiral, with one representative each from the Defence Headquarters, Nigerian Army, Nigerian Navy, Nigerian Air Force, Defence Intelligence Agency, Nigeria Police and the State Security Service.

It was unclear whether the Force Headquarters had expressed confidence in the panel’s conclusion, which appeared to contradict the earlier police stance that the police team conducted itself properly and only came under an unjustifiable attack from soldiers who were trying to cover up their ties to the suspect.

BELOW IS THE FULL STATEMENT BY THE DEFENCE HEADQUARTERS.

DEFENCE HEADQUARTERS
MINISTRY OF DEFENCE
P. M. B. 309
GARKI – ABUJA
DHQ/ABJ/901/32/DDI 8 October 2019
PRESS RELEASE
REPORT OF THE BOARD OF INQUIRY TO INVESTIGATE THE CIRCUMSTANCES SURROUNDING THE KILLING OF THREE NIGERIA POLICE PERSONNEL AND TWO CIVILIANS BY TROOPS OF THE NIGERIAN ARMY IN TARABA STATE

1. Following the directive of the President, Commander-in-Chief of the Armed Forces, Muhammadu Buhari for an immediate investigation into the unfortunate incident that led to the killing of 3 Nigerian Police Force (NPF) personnel and 2 civilians by troops of the Nigerian Army (NA) along Ibi-Wukari Road in Taraba State, the Chief of Defence Staff General AG Olonisakin constituted a Board of Inquiry (BOI) to investigate the incident. The 7 member BOI led by Rear Admiral Ibikunle Taiwo Olaiya as chairman, comprised one representative each from the Defence Headquarters, Nigerian Army, Nigerian Navy, Nigerian Air Force, Defence Intelligence Agency, Nigeria Police and Department of State Service.

2. You will recall that on 6 August 2019, reports of the sad killing of 3 policemen and 2 civilians in Ibi Local Government Area of Taraba State by troops of the NA broke out. This gave rise to serious concern by the Federal government, the military and police high command. The incident started from Ibi town, following an alarm alleging the kidnap of one Alhaji Hamisu Bala (aka Wadume) by some individuals in a Hummer bus. Captain Tijani Balarabe informed all military checkpoints along Ibi-Wukari Road, who sprang into action.

3. The alleged Hummer bus mentioned in the distress call, however, conveyed Police personnel of the IGP-IRT who were on a legitimate duty in Taraba State. Also, military checkpoints in the area were deployed by troops of Headquarters 93 Battalion, Takum, who were equally on legitimate duty to checkmate communal clashes, kidnapping and armed robbery, which were prevalent threats in Wukari – Ibi area.

4. After a thorough and painstaking investigation into the incident, the BOI submitted its report to the convening authority observing that, there were infractions and poor communication between personnel of the NPF and troops of the NA. It was also observed that there was non-adherence to the Standard Operating Procedure by both parties involved in the incident. It further made some recommendations to the NA and NPF to forestall future reoccurrence and bring anyone culpable to book in accordance with extant laws.