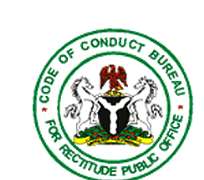 LAGOS, Tuesday, 8 October 2019: Media Rights Agenda (MRA) today accused the Code of Conduct Bureau (CCB) of contradicting itself in expressing concern over the low level of compliance with the asset declaration regime, saying the Bureau was responsible for the ineffectiveness of the legal and constitutional requirements for public officers to declare their assets.

The Chairman of the Bureau, Professor Mohammed Isah, expressed concern over the weekend while featuring in a News Agency of Nigeria (NAN) Forum in Abuja that public officers are not complying with their asset declaration obligations. He said “the level of compliance is not encouraging at all.”

In a statement issued in Lagos, MRA’s Executive Director, Mr Edetaen Ojo, said: “We are not impressed by this shedding of crocodile tears by the Chairman of the Code of Conduct Bureau over the ineffectiveness of the asset declaration regime when the Bureau itself has done everything possible since the coming into force of the 1999 Constitution to ensure that the system does not work, and has instead allowed itself and the asset declaration framework to be used to settle political scores, thereby undermining the credibility of the process.”

According to Mr. Ojo, “despite the fact that the Bureau is an institution created by the Constitution and therefore has the strongest protection among all the anti-corruption agencies in Nigeria, the others having been established by statute, the CCB has deliberately incapacitated itself and is now clearly the weakest and most ineffectual of the anti-corruption agencies.”

He described as ridiculous and laughable the Chairman’s attempt to explain away the persistent refusal by the Bureau to comply with the provisions of the Freedom of Information Act, 2011, saying “his statement is not only false and misleading, but betrays a level of ignorance that is embarrassing coming from someone holding such high public office.”

Prof Isah had said that: “if anybody as a private person or private organisation wants to access asset declaration or information contained in the asset declaration of any public officer, those conditions laid down by FOI Act must be fulfilled.”

But Mr. Ojo insisted that “the FOI Act contains absolutely no condition to be fulfilled by anybody, whether a private person or a private organization, seeking to access the declaration of assets or any information contained in the asset declaration of any public officer.”

Besides, he said, Prof. Isah’s latest claim contradicts the Bureau’s “standard refrain” that it cannot accede to requests from members of the public for the disclosure of assets declarations of public officials because the National Assembly has not yet issued guidelines for the disclosure of such asset declarations in accordance with Paragraph 3(c) of Part One of the Third Schedule to the Constitution, and that asset declarations constitute personal information which cannot be disclosed.

Mr. Ojo argued that “A common sense reading of the relevant provisions of the Constitution and the FOI Act clearly reveals the illogicality of the Bureau’s position. It is clear from Paragraph 3(c) of Part One of the Third Schedule to the Constitution that it intends that citizens should have access to the declaration of assets made by public officers. If the Bureau is waiting for guidelines issued by the National Assembly, then what is the difficulty in applying the FOI Act? The Act was enacted by the National Assembly. It applies to the CCB. It also applies to all the information, records and documents held by the CCB, except those exempted. The declarations of assets by public officers are records in the custody of the CCB. Nothing in the Constitution or the FOI Act says that it does not or cannot apply to the declaration of assets by public officers.”

He noted that the only possible explanation for the determination of the Bureau to shield the asset declarations of public officials from disclosure would be because officials of the CCB, who are themselves also obliged to declare their assets, feel that it is the only way they can protect their asset declarations from disclosure, in which case it is clear that they have a conflict of interest in the matter.

Mr. Ojo contended that besides the issue of the low level of compliance, it is also apparent that the CCB lacks the capacity to verify all the assets declarations made to it by different categories of public officers and that it would obviously do a better job in carrying out its mandate if it opens up the assets declaration and verification processes to public participation, not only by acceding to requests for such declarations but also by actively encouraging members of the public to file complaints where they become aware of any false declaration.