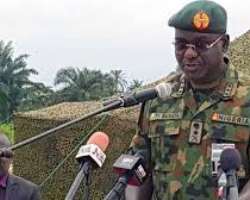 Among them were 8 adult males, one adult female and 6 children. Preliminary investigation reveals that they spent 3 days wondering in the bush trying to link up with any community where they could find succour.

Colonel Aminu Iiyasu, the Nigerian Army Operations Media Coordinator, Operation Lafiya Dole, Theater Command Headquaters, Maimalari Cantonment Maiduguri said Tuesday in a statement that they were promptly evacuated and the adult females and children were handed over to NYSC IDPs Camp while the adult males were handed over to 7 Military Intelligence Brigade for profiling and subsequent integration into the IDPs Camp.

Among them were 2 female adults and 10 children. They were later screened, documented and handed over to officials of the International Organization for Migrants at PULKA IDP Camp.

The operation was aimed at identifying and arresting fleeing BOKO HARAM criminals as well as their informants, sympathizers and logistics suppliers who were evidently finding the Theatre more and more untenable.

He further said that the troops conducted thorough searches and screening of pedestrians and commuters moving in and out of MAIDUGURI MUNICIPAL COUNCIL along MAIDUGURI - DAMATURU – BAMA Road. Those suspected to have links with the criminal insurgents were further investigated at a military facility.

On arrival at the troops location at RA GUBIO, the 3 commanders took turn to congratulate the troops on their recent exploits against criminal elements within their Area of Responsibility and also enjoined them to remain steadfast in the fight against the criminal insurgents.

Colonel Iiyasu maintained that the Chief of Army Staff (COAS) Lt Gen TUKUR YUSUF BURATAI has called on well meaning Nigerians to continue to support the Nigerian Army with information to effectively tackle the myriad of the security challenges bedevilling our nation.