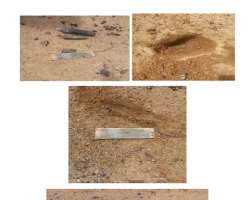 In continuation of the Nigerian Army's drive to clear marauding criminal insurgents and other unscrupulous elements from Operation LAFIYA DOLE and other theatres of operations nationwide, troops of 151 Battalion in conjunction with elements of 21 Special Armoured Brigade's Quick Response Force (QRF) thwarted the kidnap of 3 civilians by the criminal insurgents. A statement issued Monday by Colonel Aminu Iiyasu, the Nigerian Army Operations Media Coordinator, Operation Lafiya Dole, Theater Command, Maimalari Cantonment Maiduguri said the rescue operation occurred at about 12:20 pm on 4 October 2019 when the troops, while acting on information volunteered by some patriotic indigenes, blocked and engaged the criminal insurgents in a fierce fire fight at a crossing point around FIRGI village in BAMA LGA of Borno State, leading to the rescue of the civilians and a Canter truck loaded with grains.

The criminal insurgents, who succumbed to the superior fire power of the troops, abandoned the hijacked truck and its occupants and fled in disarray into the forest.

The gallant troops are still on the trail of the criminal insurgents while the rescued victims have been escorted safely back to their destination. Troops continue to dominate the area and deny the criminal elements freedom of action within the entire Theatre of operation.

In another development, at about 9:30 am on 5 October 2019, troops of 114 Task Force Battalion, while on clearance operations, discovered 2 Improvised Explosive Devices (IEDs) planted by criminal insurgents along BITTA - YAMTEKE Road.

The devices were successfully detonated by the Explosive Ordinance Disposal team, thus making the route safe again for commuters.

Similarly, in the South South, troops on Operation MESA raided the criminal hide-outs of some identified kidnap kingpins in Rivers State.

The suspected kidnappers who have been terrorising innocent citizens met their waterloo when troops of 29 Battalion simultaneously raided the said criminal hideouts in OBIO/AKPOR, TAI and GOKANA LGAs of Rivers State on 2nd October 2019.

The statement added that the raid led to the arrest of 4 high profile criminals who have been on the Security Agencies' wanted list. Those arrested include DUMBARI Bro from B-DERE community, VICTOR DOKARA from K-DERE community, GBARACO KAVILOBA from LEWE and CONFIDENCE FRIDAY from BODO community. The suspects are currently undergoing interrogations and will soon be handed over to the appropriate Security Agency for prosecution.

Meanwhile, the statement stated that the Chief of Army Staff (COAS), Lt Gen Tukur Yusuf Buratai once more appealed to the good citizens of our great country to continue to support the Nigerian Army's resolve to completely rid their communities of criminal elements by providing useful information to effectively tackle the myriad of the security challenges facing the nation.