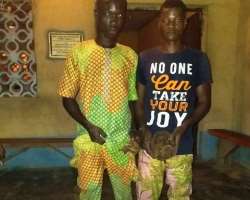 They were arrested following a complaint lodged at Eggua police station by one Amoo Bankole who reported that the two suspects were sighted at the cemetery where his mother was buried few months ago.

He told the police that the suspects were seen digging the grave of his mother and that he suspected that they were up to something evil.

Upon his report, the DPO Eggua division, SP Kehinde Oyekangun quickly mobilized policemen to the scene.

The policemen met the two men along the road. They were promptly accosted, and on searching the bag they carried, the skull of a woman was found there.

The Police Public Relations Officer for the command, DSP Abimbola Oyeyemi told The Nigerian Voice that the complaint identified the skull to be his mother.

Oyeyemi said the suspects have confessed that they exhumed the corpse of the old woman and removed her skull to use it for money ritual.

The PPRO said the Commissioner of Police has ordered investigation into the matter and that the suspects would be arraigned in court after investigation.