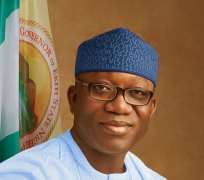 The Governor of Ekiti State, Dr Kayode Fayemi, has commiserated with the family of the late Senator Mojisoluwa Akinfenwa and the progressives family in the country on the death of the Afenifere Chieftain and former Alliance for Democracy (AD) leader in the National Assembly.

Dr Fayemi who described the late Senator as a decent and diligent politician, said his death was a major loss to the family of the progressives in the country.

Governor Fayemi in a condolence message to the family, urged them to be consoled by the fact the late politician lived a good life and gave a good account of himself as a teacher, educationist and public servant.

He said Senator Akinfenwa’s life was guided by the progressive principles, which was well demonstrated when he served as Commissioner for Education under the Chief Bola Ige-led administration in old Oyo State and as a member of the Senate between 1999 and 2003.

“We shall miss Baba’s frankness and wise counsel. He was consistent, principled and decent.

“On behalf of the government and good people of Ekiti State, I commiserate with the family of our late elder statesman the government of Osun State. Our prayer is that God will grant him eternal rest and grant the family the fortitude to bear the irreparable loss.”, He added.