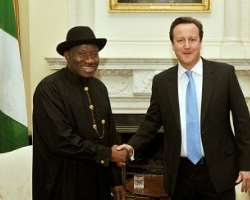 The former UK PM in the book, claimed that some British troops spotted the location of the abducted Chibok girls and offered to help in rescuing them but Jonathan refused.

However, in a response, Ikechukwu Eze, spokesman of the former president on Saturday afternoon, Jonathan said he is not the first to accuse Cameroon of lying in the book and he would not be the last, TheCable reports.

“I would urge the public to take Mr. Cameron’s accusations with a grain of salt. I will not be the first person to accuse him of lying on account of this book, and with the reactions in the UK so far, I definitely will not be the last,” he said.