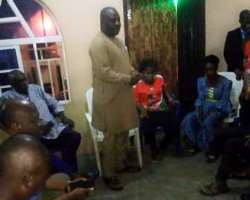 Engr. Irona gave the commendation while addressing hundreds of jubilant residents of Ndiuloukwu, Izombe, Oguta Local Government Area of Imo State during a condolence visit to the family of a fallen chieftain of the ruling Peoples’ Democratic Party in the area, Mr. Azuoma Okwara Awaraka.

He urged people of the area to embrace the human capital development initiatives of the Oil Commission, describing them as a step in the right direction.

Speaking on the late Alex Azouma Okwara Awaraka, the Deputy Governor described his death as a great loss to the PDP family in the area, even as he prayed God to grant the family the fortitude to bear the loss.

Continuing, the Deputy Governor used the occasion to advise citizens on godliness, warning that every man will give account of his stewardship before the Creator.

Widow of the deceased, Mrs. Chikamso Azuoma Okwara Awaraka, Chairman, PDP, Ndiuloukwu/Umuowere ward, Obiefule Nwauwa, family members and other stakeholders were on ground to receive the Deputy Governor and his team.

It would be recalled that the campaign Council Chairman of Ndiuloukwu/Umuowere Ward in the 2019 elections, Alex Azouma Okwara Awaraka was killed by unknown gunmen on Assa/Obile road, Ohaji, in Ohaji/Egbema LGA recently.