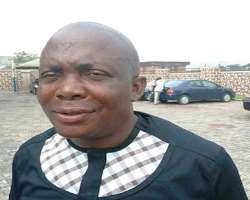 Chief Kagbude, who doubles as the Chairman of Okirighwre Community in Sapele Local Government area of the state was shot dead by assailants along the Sapele-Effurun/Warri Road on Tuesday.

The deceased was said to have been returning to Sapele where he had gone to inspect a house he was building for his mother at Okuoke along Warri road with two other persons, when he was attacked by unidentified gunmen at okwabude, close to the Sapele-Warri express road at about 5: 00pm.

The Delta State Police Public Relation Officer, Onome Onovwakpoyeya could not be reached as at the time of filing in this report, but a source at the Sapele area command confirmed the report, saying that the death has been reported at the station.

Mourning the passage of the community Chairman, Chief Eugene Okpeh Inoaghan, Chairman Sapele Local Government area said that he was disheartened by the news of the death of chief Venture kagbude, describing him as a man that was down to earth, a leader per excellent whose mission on earth was to do good.

Chief Inoaghan said that the deceased was always concern with things that would bring development to Sapele, as he was already making arrangement to bring in new transformer to provide light for the people of Okirighwre were he was chairman.

He said that the late Kagbude's death was a big loss to the People's Democratic Party and the Sapele local government councils as it would be very diffcult to substitute him for anyone for decades to come.

"He will be greatly missed,he will surely be missed by me,and all who knew him very well", he added.

Hon Austine Ayemidejor Special Project Director Asaba International Airport who also Spoke to newsmen described him as a man of peace and wondered why he was killed. He further added that Chief Venture will surely be missed by all and sundry.

Hon. Joyce Overah member representing Sapele, Ethiope West, and Okpe local government area in the board of Delta Oil Producing Areas Development Commission (DESOPADEC) expressed shock and sadness over the death of Chief Venture Kagbude describing him as a jolly good fellow and a friend of all.

He however attributed his death to the problem of insecurity and poor motorable roads, saying that if the security operatives patroling the areas were on the lookout, and the roads were properly reconstructed, it would be very difficult for hoodlums to ambush on coming vehicles.

He used the opportunity to call on the Federal government to reconstruct roads within Delta State,as it will help to avert further occurence.

Hon. Joyce Overah added that the late chief will be missed by all, especially by the people of Sapele for his goodness and immense contributions to the development of Sapele.

A relation of the deceased who pleaded anonymous said that the killing of chief Venture kagbude was done by suspected assassins, saying that the late Venture kagbude led the battle with Chief Eugene Inoaghan Executive Chairman of Sapele Local Government Council against cultism few months ago, she added that the death could have been triggered by the role he played.