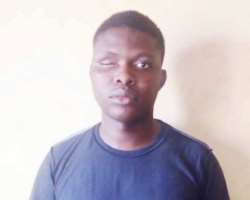 Sunday was said to be a leader of Eiye confraternity in Ikene. His arrest was celebrated by the people of Ikene and its environ.

The Nigerian Voice learnt that Blade has been on police wanted list for a long time. He was apprehended following an intensive surveillance and technical investigation into his activities.

The Police Public Relations Officer for the command, Abimbola Oyeyemi told The Nigerian Voice that the suspect confessed that he was responsible for the killing many people.

The Commissioner of Police, CP Bashir Makama ordered a full scale investigation into all past activities of the suspect. He said the suspect would be charge to court after investigation.