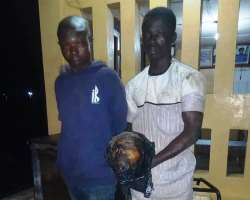 The Osun State Commander of Members of Hunters Group of Nigeria in Osogbo, Osun state have arrested two men with a human head.

In a chat with The Nigerian Voice today, The State Commander of the Hunters Group of Nigeria, Chief Hammed Nureni said the suspects were arrested at Oke-Popo in Osogbo

He said the suspects beheaded an old man that was buried last week with intent to use his head for ritual.

He explained that his men arrested two out of five suspects and assured that the remaining three suspects would be arrested.

He said the suspects have been handed over to the Divisional Police Officer in charge of Dugbe Police Division in Osogbo.

In his reaction, the Police Public Relations Officer in the State, Folasade Odoro told The Nigerian Voice that the matter is under investigation.