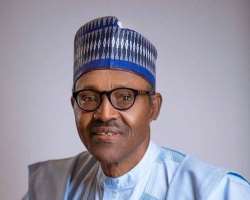 President Muhammadu Buhari has described as false insinuations that he is planning of changing the constitution in order to run for a third term in office.

Recall President Buhari was first elected democratically in 2015 , and he won a second term in office in March 2019, after defeating Atiku Abubakar of the People Democratic Party (PDP).

According to the 1999 Constitution (as amended), President Buhari is not eligible to contest Presidential Election after the expiration of his current tenure in 2023.

However, rumours are rife that the President may be planning of changing the Constitution in order to seek a third term in office. The purveyors of this allegation are relying on the fact that President Buhari’s men are in control of the 9th Senate and the House of Representatives. But Garba Shehu, Senior Special Assistant to the President (Media and Publicity) has denied the allegations.

He said on Tuesday that President Buhari as a democrat will never go contrary to the provisions of the 1999 constitution. His words: “The Presidency wishes to correct internet-based gossip and un-informed media commentary regarding presidential term limits, given credence by so-called support groups, staging street demonstrations asking President Muhammadu Buhari to do a third term.

“President Buhari intends to serve his full second elected term in office, ending 2023 – and then there shall be a general election in which he will not be a candidate.

“There is not even the faintest possibility that this will change.

“It is important to note that there was a past attempt to change the Constitution to allow for the-then incumbent president to stand for a third term.

“That attempt was wrong, unconstitutional – and rightly rebuffed. No such attempt will happen under this President.

“President Buhari is a democrat. He respects the Constitution.

Any activity aimed at altering the two-term limit will not succeed and shall never have his time nor support.”…