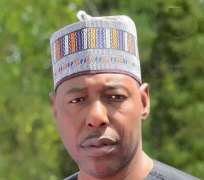 Borno state Governor, Babagana Umara Zulum has approved payment of gratuities to second batch of 1,000 former civil servants, who retired at intermediate ranks from 2013 to date.‎

This is coming two months after the governor had in July 2019 released gratuities to first batch of 1,684 low ranking ex-workers that retired from 2013 to June 2019.

Announcing this on behalf of the governor, special adviser on public relations and strategy, Malam Isa Gusau, said in a statement on Sunday, that funds had already been transferred to various bank accounts provided by each of the 1,000 retirees.

“As directed by the governor, this payment, will continue steadily, covers 50 per cent of each of the 1,000 retired worker’s entire gratuity. The balance of 50 per cent will surely be paid in another phase. The consultative idea of paying 50 per cent aim to speedily reach as many retired workers as possible.

“The list of those paid will be made public on Monday and anyone of them unable to confirm payment to his or her bank account, is required to file complaint through the union of pensioners in the state so that it gets to office of the head of service, which coordinates the payments,” Gusa said.

He noted that with the negotiated modality of payment, gratuities of retired workers, which had accumulated, will eventually be cleared. The special adviser observed however, that payments of monthly pensions to the retired workers in Borno state have largely been regular in the last eight years.