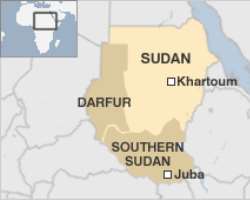 At least 48 people have been killed in clashes between rival Arab nomadic groups in Sudan's Darfur region, a leader of the Misseriya clan has said.

He said Rezeigat fighters in cars had stormed villages on Friday morning and the fighting had continued till sunset.

The Rezeigat and Misseriya and have been caught up in a series of revenge attacks in West Darfur since February.

A spokesman for the joint African Union and UN peace force said a team had been sent to investigate the reports.

“Tribes were blocking some of the access routes to where the fighting was reportedly going on,” spokesman Chris Cycmanick told Reuters news agency.

“The local population told us 40 were killed and 10 were injured.”

Correspondents say there are often clashes about grazing rights for cattle and water sources in the area.

Mr Mandil told Reuters that 21 of Misseriya had been killed and 27 people from the rival Rezeigat group had died in the clashes near the settlement of Garsila in West Darfur.

The violence between the two groups has coincided with an upsurge in fighting between the government and the rebel Justice and Equality Movement.

About 600 people died in fighting in Darfur last month – the highest monthly toll since UN and AU peacekeepers were deployed in 2008.

According to the UN, an estimated 300,000 people have been killed in Darfur and more than 2.6 million displaced since ethnic rebels took up arms in 2003.

The Sudanese government, however, says such figures are a massive exaggeration.