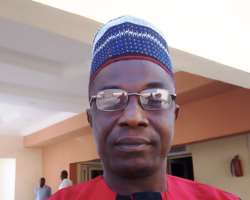 PUBLIC affairs analyst, Carl Umegboro has commended President Muhammadu Buhari for his robust measures in moving the nation out of decay and business as usual particularly the constitution of the Economic Advisory Committee (EAC) recently.

In a statement made available to newsmen on Monday in Abuja on Nigeria's 59th Independence anniversary, Umegboro stated that the country is making progress by some positive actions of the government, and therefore called on citizens to shun witch-hunting and political hostilities which have unprecedentedly, dangerously moved to a higher dimension through malicious exploitation of social media with falsehoods.

"With the constitution of Professor Doyin Salami led-EAC (Economic Advisory Council) with other distinguished economics and management experts as members including Professor Charles Soludo; former governor of the Central Bank of Nigeria, the country is convincingly set for greater heights in no distant time".

"Equally, I commend the federal government for responsibly challenging the judgment delivered by a UK court in favour of the Process and Industrial Developments (P&ID) over a purported failed gas project that was subjected to arbitration with award of $9.6 billion against Nigeria through misrepresentations by some persons".

"It's essentially important to emphasize that the vitiating elements; factors which the existence of any will invalidate any contract are mistake, misrepresentation, duress, undue influence and illegality. Hence, federal government is on track for challenging the judgment".

Again, I commend Anambra state governor, Willie Obiano for his development strategy, and therefore called on other states to consider government-community synergy for infrastructural development as a positive strategic template for service delivery in the society.

"The Willie Obiano-led government has through government-community synergy executed significant road and people-oriented projects across all the towns in the state and thereby doing away with the usual 'selective system or governor's discretion method' which in most cases favours towns with influential persons or where the governor has vested interests", Umegboro said.

"The template remarkably gives equal opportunity to all towns in the state to nominate a key project in each phase alongside indigenous contractors for bidding and execution which makes all towns to receive government attentions and developments at the same pace and capacity".

Umegboro stated that the first phase of the projects in Anambra have been visibly completed and commissioned, while the second phase is about to be set in motion. Thus, if adopted uniformly, it will reduce political victimization and intimidation in the polity.

"Similarly, the new policy in the camp of All Progressives Congress (APC) which brings all APC governors together to adopt uniform programmes is a positive development as it will enhance productivity and spark off competition in service delivery”.

The analyst argued that if all political parties can move in similar directions, mediocrity will become a thing of the past and inevitably, dividends of democracy will accrue.

“At 59, Nigeria cannot afford to continue to enthrone triviality, ineptitude and mediocrity at the expense of good governance for dividends of democracy", he concluded.