How do you stop Nigerian Politicians from being Corrupt? 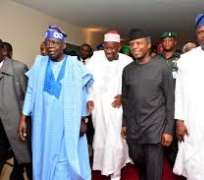 Corruption has been the bane of our lives ever since Nigeria came into existence: every year billions and billions of Naira of public funds are stolen with very few prosecuted.

Our judiciary is laughable and with one former president claiming he doesn’t believe corruption is a crime, politicians will continue to loot with impunity knowing they can’t be punished. There is no shame in being corrupt as we live in a society that encourages it – everibodi wants to chop dem own!

The Economic and Financial Crimes Commission was set-up in 2003 for the main purpose of investigating and bringing to book mainly corrupt politicians. But the EFCC despite its best efforts and in the words of Obasanjo is ‘ just a toothless bulldog’. The Commission investigates corrupt politicians, charges them and hands them over to the courts and this is where the games begin. How many politicians have been sentenced to prison? Very few! The EFCC that went to all that trouble to get them now becomes a laughing stock.

Once a case is in the courts the politicians know how to pervert the course of justice, either by bribing the judge (- or doing away with him or her all together!) or stalling for time. They have teams of brilliant lawyers who know how to drag-on a case forever asking for adjournment after adjournment: some corruption cases have been going on for more than 15 years with no end in sight. As a result no corrupt politician is scared of the law for they know they will never be convicted or at the very worse they’ll get a slap on the wrist.

And the sad thing is this has now trickled down to include anybody who’s ever been accused of corruption, fraud or theft. If you have a good lawyer – and money- you’ll get away with anything. Only small minnows like yahoo-yahoo or area boys get to face the full wrath of the EFCC and the courts.

So how do you stop Nigerians being corrupt when all the other forms of conventional punishment are not a deterrent?

To start with any politician convicted of corruption should never be allowed to hold any political office ever again (- which means 95% of Nigerian politicians will be out of a job!).Clear out the corrupt ones and honest people will take their place.

We are all afraid of our local deities and recently the Osolo of Isolo, Oba Kabiru Adelaja, made an interesting suggestion. He suggested that all politicians should be made to swear an oath to the gods not to steal any monies whilst in office. That is to say if you swear by Sango and you break your promise Sango will strike you down dead – and we all know how effective our local gods are when it comes to meting out justice! It might sound like a primitive local solution to an age-old problem but it has the capacity to work. If you drag all these thieving politicians to the shrine to swear on their deities, how many will steal after that? Not many.

Or perhaps it’s time to bring back military-style tribunals whereby corrupt politicians are arraigned before military officers (- or persons of equal standing). The charges are read out, deliberated upon and the defendant is sentenced – no long talk, no adjournments, no big-lawyer-grammar, no wahala…just simple facts: you’re a thief, it’s been proven beyond reasonable doubt and you will be punished! It works well in China and Russia and it could work in Nigeria (- if the tribunal can’t be bribed!).

Another solution would be to give the EFCC more powers, like the FBI in America, and scrapping immunity for those who like to hide behind Section 308 of the 1999 Constitution: if you’ve stolen public funds whilst in office you’re nothing more than a common thief caught stealing noodles in the market and should not have any immunity from prosecution whether you’re still in office or not

And if all that doesn’t work how about a public-name-and-shame campaign to force those corrupt politicians to return what they’ve stolen? Everyday publish their picture in the newspaper or on TV or on billboards until they give it back.

But most important of all people’s mind-sets need to change: people need to stop worshipping and celebrating corrupt officials as they are no different to the area boys you throw tyre on their heads and lynch.