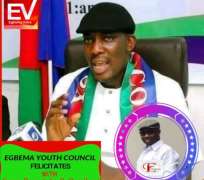 There may be renewed agitation in the Niger Delta region following purported clandestine move by some cabals in the presidency to stop the amnesty programme.

The Ijaw Youth Council (IYC), claimed that it has information from impeccable sources that some persons within the presidency want to kill the programme.

In a press release signed by the President, IYC, worldwide, Pereotubo Oweilaemi, Esq., and made available to The Nigerian Voice on Saturday, termed the move as 'ethnographic' against the region, if actualized.

According to him, "We have been reliably informed that there are clandestine moves by power players within the corridor of power at the presidency to abruptly terminate the Presidential Amnesty Programme. The move, if materialised by the enemies of peace, will be viewed as ethnophobic propensity of the present Government against the Niger Delta people".

He reminded those in the alleged unholy act that the amnesty programme is a gentleman agreement reached between the Federal Goverment (FG) and people from the region aimed at achieving lasting peace.

Hear him: "In case the plotters of the evil coup fail to know, the Amnesty Programme is a mutual agreement between the Federal Government of Nigeria and the Niger Delta people. The bargain is for the agitators to lay down their arms to accept the offer of Presidential Amnesty which has hitherto outlined terms and conditions to be complied with by both sides.

"The Amnesty Programme is a well thought out developmental programme of the then government of late President Umaru Musa Yar'Adua with different segments. The Programme was phased into three segments which are: Disarmament, Demobilisation and Reintegration for the first segment; Rehabilitation for the second segment while Strategic Implementation Work Plan (SIWP) for the third segment".

While noting that the first phase of the Programme has been achieved, he said the second segment which consists of the total rehabilitation cycle is yet to be done.

He posited that the amnesty programme has no time bound owing to the fact that the programme in its entirety is yet to be fulfilled just as he disclosed that the third phase of the programme still remains in the drawing board.

"There is no time limit as to when the Programme will be terminated especially when all the segments have not been executed. The third phase has not been attended to which is strictly for the massive development of the region. None of the developmental master plans initiated in the Programme has been implemented".

"Where is the N1.5trn Coastal Highway already awarded before Yar'Adua's unfortunate death in 2009? What about the East West Road which is now abandoned by this present Government? What about the Federal Government, Multinational Oil Companies and Private Sectors tripartite agreement to massively develop the riverine communities which was duly incorporated in the Amnesty offer?

"The agitators did not accept the Amnesty offer simply because they agreed to be paid N56,000 for a period of time. May we remind those in Government to check their records? The first meeting between the top echelons of the Niger Delta freedom fighters and late president Omaru Musa Yar'Adua which had heralded the smooth kick off of the Amnesty Programme, the agitators tabled their demands to Yar'Adua who beat his chest that he will not disappoint the Niger Delta people. All terms and conditions discussed in that meeting were documented by the Federal Government and they formed part of the Amnesty Programme.

"The Government has not fulfilled its own part of the bargain since the boys have laid down their arms for oil to flow freely into the nation's coffer. Terminating the Amnesty Programme without fulfilling the conditions stated therein is a breach of trust and agreement and it cannot go scot free without being visited with dare consequences.

"The world is watching us. Niger Delta crisis is a global issue. This was the reason why the agitators had earlier insisted that they want UN representatives to witness the truce. People should not pursue personal ambition to endanger the corporate existence of Nigeria. We hope that Niger Delta people will not be blamed for any breakdown of law and order. Let us be wary of our actions. Least we will jeopardize our corporate coexistence", the release added.