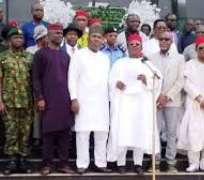 Onitsha, Eastern Nigeria: Saturday, 28th Sept 2019: The Eleven Governors of Eastern Nigeria and the 285 Members of the two regions’ Houses of Assembly and their Hon Speakers must introduce and implement free, compulsory and quality nursery and primary education to all children of nursery/primary school ages in Eastern Nigeria. This must include changing of school curricula in the two regions particularly in the States of Southeast especially Anambra and Abia and most of the States in the South-south to now bear or be upgraded to ‘nursery-primary school curricula’.

These must be followed by the injection of adequate capitals to upgrade the physical structures of the affected schools as well as recruitment and retraining of teachers and provision of adequate learning materials and environments. There shall be effective and routine monitoring and checkmating of the overbearing extortionist activities of the private and missionary school owners or operators of nursery, primary and secondary schools in Eastern Nigeria with Anambra and Abia States as a particular case study.

Such Government monitoring must devoid of sundry extortion or imposition and collection of sundry levies but include ensuring provision of good learning environments including well ventilated classrooms, boreholes, toilets, chairs, recreation facilities and electricity; good learning materials including libraries, laboratories and computers and, recruitment and retraining of quality teachers.

As part of Government periodic monitoring of private and missionary schools offering nursery/primary education in Eastern Nigeria, their teachers’ remunerations and other welfare packages must be investigated as well as sundry extortions imposed on parents and guardians including heavy monetization of home works or assignments, PTAs; reading materials (i.e. books), school uniforms, graduations ceremonies, etc. Cases abound where parents and guardians or wards are routinely and rapaciously extorted while peanuts are paid as teachers’ remunerations; with many, if not most of such teachers possessing ordinary School Certificates or ‘attempted others’. Few others with good qualifications are also paid peanuts.

The above forms the major points of the concluding part of Intersociety’s recent letter to the Eleven Governors, 285 Hon Members of the Houses of Assembly, 98 Hon Members of the House of Rep and 33 Senators of Eastern Nigeria, totaling 427. The letter was dated 26thSept 2019 and signed on behalf of Intersociety by Lawyers Obianuju Igboeli, Ndidiamaka Bernard, Chidimma Udegbunam and Chinwe Umeche (principal officers) and Emeka Umeagbalasi (a Criminologist & Graduate of Security Studies).

Intersociety had in its Executive Summary statement, issued on Wednesday, 26th Sept 2019 informed all that it originally wrote the named 427 elected public office holders in Eastern Nigeria, demanding they rise to their constitutional rights, powers and duties as they concerned the grossly sectionalized or lopsidedness in the appointment and posting of top military and policing officers manning key military and policing formations in Eastern Nigeria.

These owners have cashed in on the acute government neglect of the important sub-sector to oppress parents and guardians or wards to the extent that several of them have become bed-ridden or suffered heart attacks. The decadence and degradation in the Government owned nursery (if any) and primary schools in Eastern Nigeria or most part of same are so high that parents and guardians attempting to enroll their children into same are mocked and jeered at left, right and center around and outside their living environments.

The bashings they receive from their grown up children for sending their kids to decayed and neglected Government owned nursery (if any) and primary schools are torrentially unceasing. Several young wives have also divorced or quitted their marriages as a result. Many have been impoverished while training their kids in highly exploitative private and missionary nursery and primary schools in Eastern Nigeria. It is particularly shocking and tearful that a mother or indigent parents of four-five children will have to cough out N250.000-N300.000 or more to be able to enroll their four-five kids at beginning of every new session into private or missionary nursery and primary schools.

Today, in the two regions, it takes not less than N40, 000-N50.000 to enroll a child of nursery/primary school age into private nursery/primary school. This is when reverse is supposed to be the case, yet pieces of evidence abound where some, if not many of the Eastern Govs squander billions monthly on frivolities including employment of thousands of political aides in each State. Some Govs go as far as spending N500m-N1b each per month in the remunerations of their below Special Adviser political aides; with such frivolous appointees adding no values to the general development of their States. This is even when such amount can turn around the physical structures of not less than 200 nursery/primary schools per month in each of the States.

As promised in our Executive Summary, the electronic link to the letter is here: http://intersociety-ng.org/phocadownload/2019/security-in-the-midst-of-official-insecurity-is-an-impossibility-and-a-wild-goose-chase-intersociety.pdf. The electronic link to the eight graphic tables exposing the lopsided or sectionalized headship of key military and policing formations in Eastern Nigeria is here:http://intersociety-ng.org/phocadownload/2019/tables-of-sectionalized-headship-of-top-military-policing-formations-in-eastern-nigeria.pdf. Also see http://saharareporters.com/2019/09/17/ranked-poorest-south-east-ebonyi-add-800-aides-existing-4000-appointees?fbclid=IwAR0a_sLrmyXaZorBeCOYEgLCLWleY7aYJ5qbr7El5pV8Ml1c_OL5BI8ZDbw#.XYO7cLuQTSQ.facebook