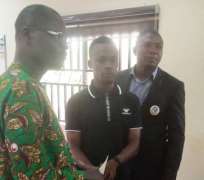 The best graduating student of the Delta State University (DELSU), Abraka for the 2018/2019 academic session, Mr. Jonathan Abel Maviano, has been rewarded with N5 million by the state government for hard work.

Presenting the cheque on behalf of the state government in a brief ceremony, the Executive Secretary, Delta State Bursary and Scholarships Board, Hon. Sunny Orishedere, stated that the administration of governor Ifeanyi Okowa is committed to encouraging Deltans especially the youths in attaining to the apex of their chosen endeavours. Hon. Orishedere noteded that the state government through the Bursary and Scholarship Board is determined to assist tertiary students of Delta State origin in their academic by payment of bursary to them yearly.

The Executive Secretary who disclosed that recently scholarship was awarded to a Deltan, Miss Precious Okafor for winning the first place of the Para table tennis at the fourth National Youth Games, thereby making the state proud, said the state government is poised on encouraging youths to excel in their field of study and any area of endeavour.

He advised students to take their studies seriously and not to engage in social vices such as crimes and hard drugs that would endanger their lives. Hon Orishedere commended Mr Abel Maviano for being focused and determined to excel in his academic pursuit.

In his remarks , Mr. David Obayagbon, guardian to Jonathan Maviano commended governor Okowa for fulfilling his promise to reward the best graduating student.

Responding, the beneficiary, Mr. Jonathan Maviano who was full of joy thanked the state government and the management of the state Bursary and Scholarship Board for the kind gesture adding that it would spur him to work harder.

He described the gesture by the state government as an investment and pledged to give back to society what he has received.