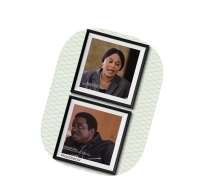 Pastor Busola Olotu
Two pastors who knew the disgraced Pastor Biodun Fatoyinbo in Ilorin Kwara state have given some testimony about him, in the wake of the rape allegations by Busola Dakolo.

The pastors spoke in almost an hour interview with TV Talkshow host, the beautiful Adesuwa Onyenokwe. It was aired on Arise TV on Thursday night and is trending on You Tube.

One of the pastors, Busola Olotu, a lawyer actually said as far as 2011, Busola’s sister, Funmi Ayeni reported to her that Fatoyinbo raped her sister and that the incident had given the young lady a lot of psychological problems, almost to the point of depression.

Funmi asked Mrs Olotu to counsel her younger sister, who Funmi said has become so distraught and has gone through personality changes after the rape. Busola, Funmi said, had been a role model in the family, someone who loves God. Rev. Emmanuel Oset
“Even on the phone, I knew I was speaking to a troubled soul”, she told Onyenokwe.

She summarised Busola Dakolo’s emotions at the time: “It was like why should this happen to me. What have I done to deserve this. This is just too much for me to handle. I don’t know how to get my life back”

She said she believed the story as three other women previously informed her that Fatoyinbo raped them. Fatoyinbo and Busola Dakolo: Bukola has not been able to forget the rape incident

Reverend Emmanuel Oset equally said he was aware of several rape cases involving Fatoyinbo and he had hoped he would stop such acts.

He set out to counsel Fatoyinbo in the wake of the allegation by Ese Walters in 2013 that Fatoyinbo raped her. Ese was attending Fatoyinbo’s Commonwealth of Zion Assembly. Oset’s intervention however yielded no fruit.

““People have spoken. People spoke in 2013, but you can only help somebody who wants to be helped”, Oset told Onyenokwe, when asked whether the church has been complicit in not standing up to deviant behaviour by pastors.

“If somebody doesn’t want to be helped, even God will not be able to help him, His hands will be tight in that regard,” he said.

“When in August 2013, news broke out online concerning him and his ministry, as somebody he was close to as an elder I thought it was my responsibility to get across to him.

“I was preparing to go to the United States for ministry, and after some efforts, because it wasn’t easy to get through to him, his pastor in Ilorin here, I told him, get through to your boss and I want to share a thing or two with him.

“Eventually, he succeeded, and he called me from Abuja. And I told him this news is all over the place and I want to hear from you and I want to also give you some counsel if need be. And he said he would get in touch.

“I said okay, I’m on my way to the US, while I’m there if I want to get through to you how do I do it? I thought he would just say sir you can get through to me using my email. Then he said his fear that time was that he was being bugged.

“When I came back from the United States, I still tried to get across to him, because my desire is always to please God.

“I am not saying this to impress anybody, I wasn’t part of those already making comments on the issue. I just wanted to see how I could be useful in terms of helping him, but he didn’t show up.

“I waited for about… from August 2013 to April 2014. When he didn’t show up, and he was coming to town, having meetings I was seeing his billboards in town, well, my wife and I said to ourselves we’ve done our bit. It was then I wrote him a letter and I said consider that we no longer have anything to do with you and your ministry. I didn’t post it, it was hand-delivered by his own pastor.”

Oset is the senior pastor of Champions Church, also based in Ilorin and generally regarded as the spiritual father of Fatoyinbo.

Watch the interview here or on You Tube:

But on Instagram on Friday, Fatoyinbo reacted to the interview by telling his followers: “Do not be bothered if those who you have been a huge blessing to turn against you because of ingratitude, envy and Jealousy. Don’t even think about it for a second, don’t let who they are change who you are!”