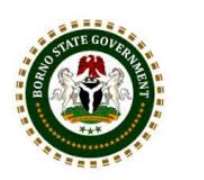 Borno State Government delegation led by the State Commissioner of Agriculture and Natural Resources Engr. Bukar Talba on behalf of the state Government yesterday presented a letter of expression of interest for partnership with NIRSAL.

Other members of the delegation include, the Commissioner of science, Technology and Innovation Engr Babagana Mustapha, Former Commissioner of Education and elder stateman Hon. Musa Inuwa Kubo and the Principal Secretary to Gov. Zulum Barr. Mustapha Busuguma.

It could be recalled that Governor Babagana Umara Zulum back in May this year visited the Head office of the Nigeria Incentive-Base Risk Sharing System For Agriculture Lending (NIRSAL).

The Governor's visit then was to explore opportunities for the farmers in the state.