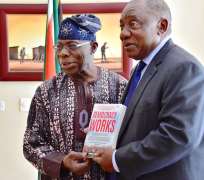 South Africa Presudent, Cyril Ramaphosa, has told former President of Nigeria, Olusegun Obasanjo, that no Nigerian was killed in the latest xenophobic attacks in the country.

The ex-President of Nigeria, who was in South Africa to launch a book he co-authored, met Ramaphosa and discussed the xenophobic attacks and other issues affecting the two countries.

Khusela Diko, the Spokesperson for Ramaphosa, disclosed in a statement on Thursday that the two leaders also used the opportunity to reflect on recent events in Africa.

Diko said, “The leaders engaged on misconceptions created about the situation in South Africa that gave the impression that Nigerian nationals in particular had been victimised.

“No loss of life was reported among Nigerian nationals in South Africa during this period.

“Former President Obasanjo expressed his sincere appreciation of President Ramaphosa’s recent appointment of a team of Special Envoys who have in the past few days visited a number of African states to deliver a message from the President regarding the incidents of violence.”