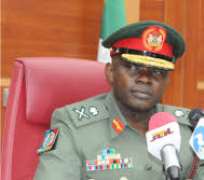 The Chief of Defence Staff (CDS), General Gabriel Olonisakin has urged the Nigerian media and other stakeholders to partner with the Armed Forces of Nigeria (AFN) towards solving the security challenges facing the country.

According to him, the nature of military operations demand that robust military- media relations be maintained for national enlightenment, sensitization and security.

Colonel Onyema Nwachukwu, the Acting Director, Defence Information, Defence Headquarters Abuja said in a statement Friday that General Olonisakin, who was the Special Guest of Honour at the 2019 Defence Correspondents Seminar, held on Thursday at the Defence Headquarters (DHQ), Abuja, described the media as a veritable non-kinetic measure for winning the hearts and minds of the citizenry in tackling national security challenges.

Revealing the theme of the Seminar as, “Enhancing National Security and Cohesion through Responsible Media Reportage”, the CDS avered that it was imperative for the AFN to mobilize and sustain support for its ongoing operations by promoting mutual understanding between the military and the media.

The Defence Chief further urged media practitioners to be discreet while reporting matters of national security with a view to promoting peaceful co-existence and national cohesion.

He also appealed to them to refrain from glorifying boko haram terrorists and give undue publicity to criminal elements.

The CDS disclosed that the support of the media would spur the current efforts by the AFN and other security agencies in tackling insecurity.

Gen Olonisakin assured that the AFN will remain professional and adherent to the rule of law and respect for human rights.

The CDS also noted that aside combating terrorism, insurgency and banditry, the Nigerian military is equally complementing the effort of the Nigeria Police in handling other internal security challenges and sundry crimes.

Also, delivering his keynote address, as the Guest Speaker at the Seminar, the Director General, National Orientation Agency (NOA), Dr Garba Abari, noted the military, NOA and media are major stakeholders in ensuring national cohesion while identifying “national cohesion and security ” as a collective responsibility of all the stakeholders.

Earlier in his welcome address, the Acting Director, Defence Information (DD) Colonel Onyema Nwachukwu said the seminar was aimed at enhancing the capacity of Defence Correspondents to enable them cover the defence beat effectively.

The DDI who further disclosed that the capacity training was part of DHQ responsiveness to national security commitments, as contained in the CDS vision, noted that the AFN is positively engaging the media as critical stakeholders and partners in guaranteeing national security.

“The media will continue to be an effective instrument for crisis management and conflict resolution as well as veritable tool for socio-political development,” Nwachukwu said.

While thanking the CDS and the participating journalists for being part of what he described as a positive stride towards improving military-media relations in the AFN, Col Nwachukwu observed that the participants will be equipped with fresh ideas and perspectives in the coverage of defence and security matters, given the sensitive and unique nature of these beats in nation building.

The first lecture titled, “Challenges of Managing Security Information and Exigencies of Media Timelines – Striking the Balance in National Interest,” was delivered by Professor Samaila Mande, Dean, School of Post Graduate Studies at the National Open University of Nigeria.

The other paper titled “Taming the Menace of Social Media and the Challenges on National Security” was delivered by Dr Cosmos Eze, Associate Professor of Mass Communication, Ahmadu Bello University, Zaria.