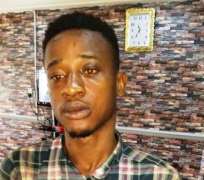 Police in Ogun State have arrested a 27-yaer-old man simply identified as Ebuka for robbing and inflicting various degree of injuries on his former employer, Mrs Theresa Nnamdi.

He was arrested following a distress call received by policemen at Mowe division that armed robbers have invaded Theresa's house and held her hostage.

The Police Public Relations Officer for Ogun State Police Command, Abimbola Oyeyemi told The Nigerian Voice that before the arrival of the policemen, Ebuka had stabbed the woman on her right hand, tied her legs with rope.

The PPRO said "The suspect worked in the fish farm of his victim before he was sacked due to his shady character."

"He went to the fish farm and stabbed the farm manager severally before he attacked the woman in her house".

"The suspect forced the woman to transfer a sum of N40,000 to his account. He equally ransacked her room and took her laptop, N5,000 cash, phones and other valuable before he was arrested by the policemen," Oyeyemi added.

During interrogation, the suspect claimed to have worked with the woman for four months and that he was living with the family throughout that period.

He stated further that his problem started when he was duped of his four months’ salary by an online scammer who promised to help him travel abroad, collected his four months salary and blocked him online.

The man said in order to have some money with him, he went to the farm and stole some items.

He said the manager caught him and reported to the woman and the woman sacked him immediately.

The police spokesman said a knife, broken bottle, the rope, phones, laptop were recovered from the suspect.